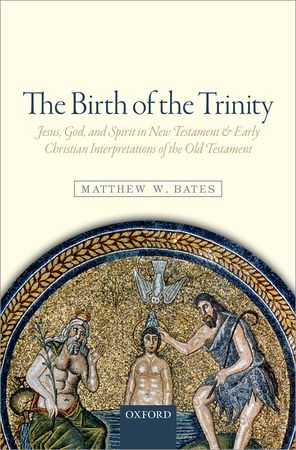 In this post, I interview Matthew W. Bates about his recent book, The Birth of the Trinity: Jesus, God, and Spirit in New Testament and Early Christian Interpretation of the Old Testament (Oxford University Press, 2015). Matt received his Ph.D. from Notre Dame, and has served for the past four years as Assistant Professor of Theology at Quincy University in Quincy, Illinois. In addition to his recent book on the Trinity, Matt has written a book on Paul’s method of interpreting Scripture: The Hermeneutics of the Apostolic Proclamation (Baylor University Press, 2012). He has also written articles for Journal of Biblical Literature, Revue biblique, The Catholic Biblical Quarterly, and The Journal of Theological Studies. Matt has been a good friend since we met at graduate school at Regent College, in Vancouver, B.C.

ML: Matt, thanks for being willing to do this interview with the Theological Miscellany blog.

MB: Thanks, it is a pleasure to be invited.  This is my first “author interview” so my palms are sweating.  Are you are going to hit me with a tricky question that is wrong no matter how I answer:  “So, Matt, since it is clearly heretical to think that the Trinity can be born, why are you so determined to defend this view?”—so that I fumble for words, awkwardly clear my throat, start over several times, and then finally break into tears saying that this isn’t my view at all….  Oh wait, this is a blog interview?  And I can spend as much time as I wish crafting a reply?  Oh, okay, I guess I’m not nervous anymore.

ML: Matt, I’m glad you pulled yourself together. It looked for a moment like this interview was headed for disaster! OK, what’s the big idea in your book?

MB: The big idea is that the concept of the Trinity emerged in earliest Christianity to a large degree because the first Christians were reading their Old Testament in a specific person-centered fashion.  They were in the habit of searching the OT for unmarked dialogical shifts and then seeking to tease out the identity of the speaker.  The technical term for this is prosopological exegesis (combining the Greek word “prosopon” for person or mask and “logos” for word or divine-inspiring agent).  So, the idea of Father, Son, and Spirit as distinct divine persons capable of conversing with one another in a time-transcending fashion emerged in connection with a specific reading strategy.  Christians of the New Testament era were reading their OT in such a way that God was differentiated as persons in conversation.  Moreover I think that it can be demonstrated that this divine differentiation was not an arbitrary way of reading the OT, but is a “good” reading strategy.

ML: Has anyone argued this before?

MB: Not for the earliest Christianity of the New Testament.  A few scholars of the patristic era (roughly the second to the fifth century) have suggested that prosopological exegesis was vital to Trinitarian developments (e.g., Carl Andresen, Marie-Josephe Rondeau, and Michael Slusser).  But these scholars generally begin with Tertullian and Origen and move forward in time to show how prosopological exegesis functioned in the third and fourth century and beyond.  No other full-scale study of which I am aware has ever traced this back into the NT time period.

ML: Prior to your work, what were the common historical data points for plotting the development of belief in the Trinity?

MB: The three main ways other scholars currently plot the development of the belief in the Trinity are as follows: (1) Trinitarianism by encounter with the historical Jesus—the assertion that earthly Jesus was so obviously divine that the doctrine of the Trinity more or less emerged instantly around him; (2) Trinitarianism by Hellenistic philosophical imposition—the notion that the Trinity emerged when Jewish monotheism gave way to Greek philosophical categories of thought;  (3) Trinitarianism as the outgrowth of mediated Jewish monotheism—the idea that within Judaism certain intermediaries served to broker God to the world (e.g., angels, wisdom, logos), and that as Jesus and the Spirit came to be described in terms of these intermediaries, they came to be regarded as divine.  Now within these three broad streams there are all kinds of off-shoots.  For example, Larry Hurtado insists that Jesus was worshipped from the beginning, but nevertheless mediatorial categories were important.  Meanwhile Richard Bauckham (followed by N. T. Wright and others) thinks Jesus and God shared a unique personal identity (usually called a “Christology of Divine Identity”).  So my model could be considered a new model that does not obviate, but supplements and corrects various dimensions of these other models:  (4) Trinitarianism by continuity in prosopological exegesis—that is, the reading strategy that allowed our NT authors to differentiate the one God of Israel was the same strategy used by the later Fathers of the church when they more definitively framed the doctrine of the Trinity.

ML: What is the most surprising or significant find of your book?

MB: Personally, I was surprised that the study proved to be so exegetically and theologically generative.  The NT is such heavily worked ground that it is unusual to be able to offer an interpretation of a passage that has never before been proposed by another scholar.  But numerous novel interpretations of specific biblical passages emerged.  I’ll be curious to see how other scholars assess these.

I would identify three things as especially significant: (1) a new historical model for how the doctrine of the Trinity first emerged; (2) the suggestion that “Divine Identity Christology” and other NT Christological models need to take into account NT data showing that Jesus Christ was understood to be a divine person who conversed with other divine persons—i.e., we find what I term a “Christology of Divine Persons” in the NT; (3) when Jesus Christ was regarded as speaking in the OT this wasn’t because our NT authors were reading “typologically” (contra Richard Hays) but rather prosopologically.