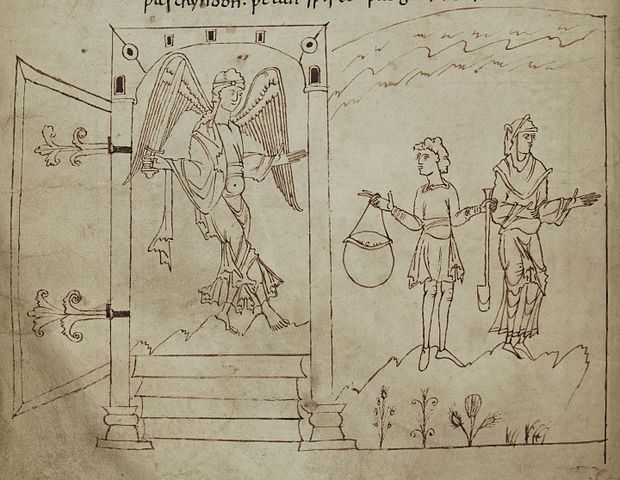 The Garden of Eden…

[I recently read Iain Provan’s Seriously Dangerous Religion and Discovering Genesis, and hosted an interview with him, and wanted to share a few thoughts.]

Readers of Genesis may be forgiven for assuming that the ‘curse’ in Genesis 3 introduced all forms of discomfort, pain, and trouble that exist within the created order. The woman would experience birth pains and the man would sweat while trying to uproot thorns from the ground. Reading back from the curses of Genesis 3 leads one to imagine a Garden of Eden full of blissful perfection. Adam and Eve waltzed through the garden effortlessly plucking fruit off (the right) trees and plucking roses from thornless bushes.

But there are a few things wrong with this picture.

Most obviously, Genesis 2 describes the first humans as workers, not loafers. God took the man and placed him in the garden for the express purpose of working the soil (2:15), and then formed a helper—‘one corresponding to him’—to share that task (2:18).

Not to get too technical, but one has to imagine a different human body to suggest that sweat came with the fall. As a physiological point, sweat is a good thing. Those with hypohidrosis—or the inability to sweat—usually overheat, and that’s a problem. Just try turning off the water pump on your car engine. Our biological engine would blow if we tried working hard without sweat.

But doesn’t Gen 3:19 state that because of sin the man would now have to break a sweat as he worked? Notice that Gen 3:19 says that the man would eat ‘by the sweat of his brow.’ The phrase refers to the sweat produced by anxiety over one’s food source. What if an enemy sweeps in and steals your crops? What if locusts gobble up all your crops? What if hail destroys your grain? Sweating because of hard work wasn’t the problem. Instead, the anxiety around securing enough food leads one to break into a stress-induced sweat.

Similarly, thorns (spines and prickles) are a good thing, just ask a little bird trying to find the best spot to raise its young. Or ask a cactus trying to defend itself against predators. Apparently spines also play an insulating role for some plants as well. Take away thorns, and herbivores might gobble up an entire plant species, leaving certain animals without coverage. The problem in Gen 3:18 is that the ground would put forth ‘thorns and thistles for you.’ The idea is that there would be some sort of hostility between the man and the ground, such that his work was frustrated. Moreover, the phrase ‘thorns and thistles’ refers to a ‘desolate place’ (Hos 10:8) where it is possible but difficult to farm.[1]

Genesis 2 gives no indication that Adam and Eve bore children in the garden. But had Eve given birth, would it have hurt? Here again we have to imagine a completely different physiology (or a primitive epidural) to say ‘no.’ Pain is a brilliant communication system that our body provides. When working well, it protects us from harm. If you get too close to a fire, your body sends an urgent and painful message to step back … which can really help.

God tells the woman that he would ‘greatly increase her pain in childbearing’ (3:16), suggesting that pain was already part of human existence prior to the fall. Moreover, as Provan points out, the text doesn’t use the typical term for labour pains, and more likely refers to the ‘circumstances’ surrounding birth. This line of interpretation speaks more directly to the anxieties around infant mortality that were a regular part of life in the ancient world (and today!).[2]

Genesis 2-3 does not tell a story where humans had perfection, lost it, and wanted it back. Yes, something awful happened when humanity sought autonomy from God. But Eden (and creation more generally) was not blissful perfection, though I’m sure it was blissful. It was good and blessed, but also not yet what it would become. Sin affected the sources of blessing—work, food, childbirth. Humans would now need to overcome obstacles and fight to secure blessings. Yet, because change and development were intrinsic to creation, good things were still possible beyond failure. Even from within the OT, nothing was ‘inevitable’ in the post Eden world.[3] Crops could still grow, and women would give birth. The wise could still grasp the ‘tree of life’ (Prov 3:18).