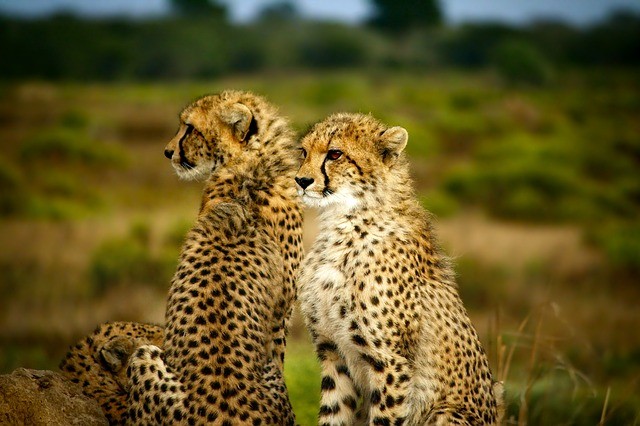 When I was a kid, I had a passion for speed. The idea of an SR-71 Blackbird tearing through the sound barrier 3x over was more than enough to fuel my passion to move fast. I was the fastest kid in our elementary school class (in my memory at least), probably until 5th grade, when one girl could run the 100-yard dash faster than me. In my best ever game of high school soccer my coach assigned me to defend the star midfielder of Shipley School, a team strongly favoured to win. The goal was to shut this player down by staying on him the entire game. We held them to a 1-1 tie. I must have run 10 miles in that game, just trying to keep up with that midfielder! (Admittedly, they crushed us in the championship game—I couldn’t keep up anymore). Not surprisingly, my favourite animal was the cheetah, which can accelerate to 60 mph in 3 seconds and turns on a dime.

I see this same passion for speed in my son, who sincerely believes that he’s faster on all fours than on his two feet (he’s not, but it feels that way to him). He’s taken up my love of cheetahs, and even started a small greeting card business to raise funds for their protection. He’s given every penny he owns to Born Free and the Cheetah Conservation Fund.

It saddens me to hear recent news that the world’s cheetah population has plunged to only 7,100, far fewer than scientists had previously thought. In 1900 there were over 100,000. Zimbabwe saw cheetahs drop from 1,200 to only 170 in 16 years. They now occupy only 9% of their habitat range in 1900. Habitat loss from farming, illegal fur trade, and capture for pets are all contributing to this precipitous drop in numbers. Their gene pool has now shrunk so small that birth defects further threaten their survival.

It is easy for those of us in the US or UK to look disapprovingly at those who contribute directly to the cheetah’s demise through poaching or land-grabbing. But for those of us who have never had a big cat pilfer our only food source, or who have never needed to clear land to farm enough food to survive, it is worth hesitating before casting judgement. There are indirect forms of habitat loss that contribute just as much to cheetah’s critical endangerment.

For many, concern for animals is an obvious part of the Christian vocation. They are part of God’s wonderful creation after all. In the UK, William Wilberforce championed the cause of animals and helped found the Royal Society for the Prevention of Cruelty to Animals. But for others, creation and animal care are to play a deeply subordinate role to other tasks like evangelism and humanitarian work.

How does the Bible address these matters, and how might it help us sort out the relative value of caring for the cheetah’s decline when, for instance, children are dying in Syria?

To begin, the Bible repeatedly affirms God’s love for all creation. This theme resounds from day 1 in Genesis 1, weaves its way through the most-quoted verse in Scripture (‘for God so loved the cosmos …’ Jn 3:16), and echoes ominously (‘your wrath has come … to destroy those who destroy the earth’ Rev 11:18) and favourably (‘a new heaven and a new earth’ Rev 21:1) in the Bible’s last book.

But beyond affirming God’s love for creation, the Bible also speaks to creation’s goodness apart from, and in relationship to, creation. Let’s look at just a few ways from Genesis 1-2:

Since animals have value to God apart from humans, we can say that the cheetah has inherent, and not just instrumental, value. To that end, and because humans are called to value what God values, Genesis 1-2 drive us toward concern for cheetahs as an end in itself. Preserving their habitat and life needs no Gospel or evangelistic rationale. Moreover, Genesis 1 reminds us that at the heart of the human identity is God-like rule over animals. Genesis 2 then affirms our kinship with animals, and our shared participation in the life-breath of God. To that end Genesis 2 sees God call humans to serve the ground by tilling the garden and protecting it (Gen 2:15).

Ps 148 gives us a picture of how we might ‘rule’ and ‘serve’ simultaneously. In that Psalm, the psalmist summons all creation to give God praise—all angels, sun, moon, stars, sea monsters, fire, hail, mountains, wild animals, flying birds, kings, young and old. What if our rule in creation means that we ensure that creation can voice its praise to God? And how does hail praise God? By doing what hail does—crash down upon the earth. And how does the cheetah praise God? By chasing a Thompson’s Gazelle at 60+ mpg around a tight curve, keeping its tail steady, stretching out over 22 feet per stride. William Brown follows the environmental logic of this psalm:

Can a stream poisoned by toxic waste praise God? Can trees destined for newsprint for tabloids clap for joy? Can the heavens adequately reflect God’s glory when clouded by smog?[3]

Is there any doubt that God delights in watching the fastest land animal? That creation’s goodness is bound up with their plight?

I know that we all have our causes, and not all people are called to protect the cheetah. But some are, and it matters to God.

Follow TheoMisc on WordPress.com
We use cookies to ensure that we give you the best experience on our website. If you continue to use this site we will assume that you are happy with it.Accept