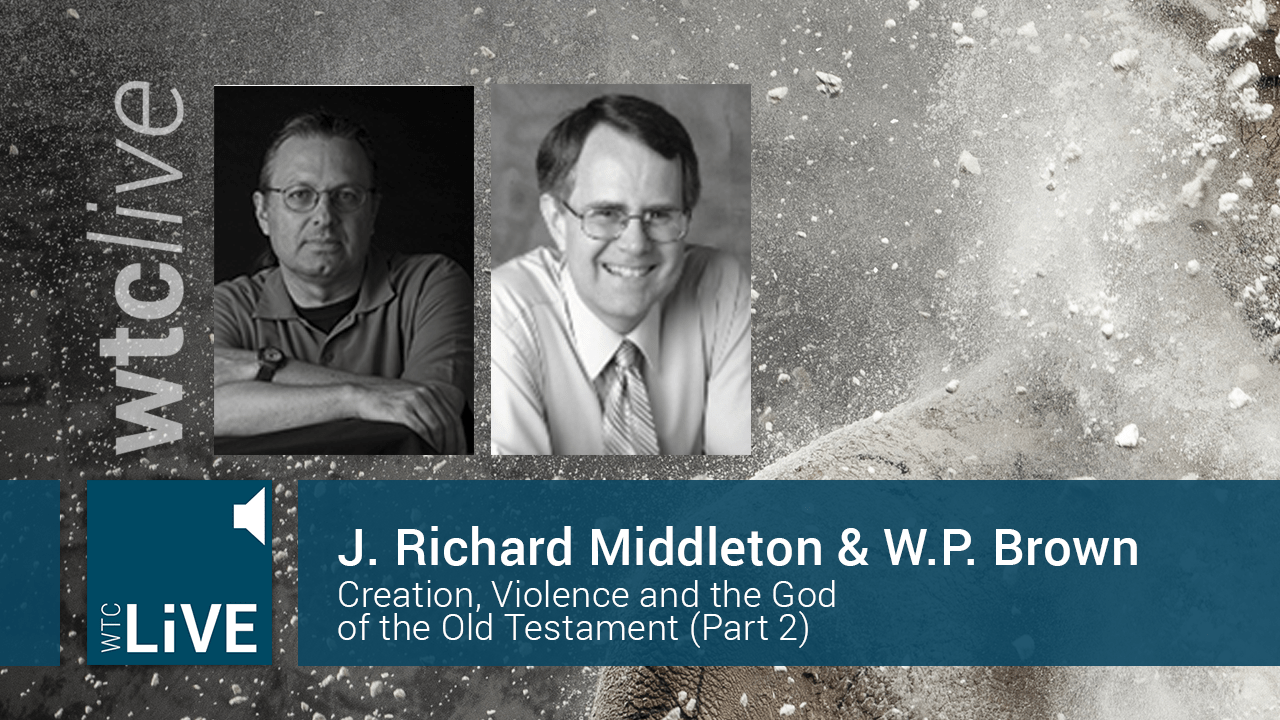 With: Richard Middleton and William Brown.

In this WTCLive episode, Matt continues the discussion on the subject of creation, violence and God with two of his favourite Old Testament scholars. Creation and the question of violence occupy an important place in the work of these Old Testament gurus. Plus, they’ve both just come out with some fantastic new books that you’ll want to read to help you navigate these topics and to open up new worlds. Middleton’s book is A New Heaven and A New Earth: Reclaiming Biblical Eschatology (Baker 2014) and Brown’s is Wisdom’s Wonder: Character, Creation, and Crisis in the Bible’s Wisdom Literature (Eerdmans, 2014).

This is the second in our series on ‘Creation, Violence and God of the Old Testament’ (see part one here.)

Richard earned a Ph.D. from the Vrije Universiteit, Amsterdam, in a joint-degree program with the Institute of Christian Studies, Toronto. His other degrees include: M.A. in Philosophy, University of Guelph (Canada), 1985, and B.Th., Jamaica Theological Seminary, 1977. Dr. Middleton has done additional graduate studies in the Old Testament at Colgate Rochester Divinity School (1986-1988), and in religious studies and philosophy at Syracuse University (1984-1985).

He is widely published in religious periodicals and journals, as well as the author of four books. His most recent books are The Liberating Image: The Imago Dei in Genesis 1 (Brazos) and A New Heaven and a New Earth: Reclaiming Biblical Eschatology (Baker Academic). He has edited a volume of essays on Caribbean Theology for Pickwick Publications, and is working on a manuscript for Abingdon Press on the dynamics of human and divine agency in the books of 1 and 2 Samuel. Special areas of interest are Old Testament theology, the Christian worldview, the books of Genesis and Samuel, the doctrine of Creation, and Christianity and postmodern culture. He also serves as an adjunct professor of Old Testament at the Caribbean Graduate School of Theology in Kingston, Jamaica, and is the president of the Canadian Evangelical Theological Association.

William earned his Ph.D. at Emory University, his MDiv from Princeton Theological Seminary, and his BA from Whitman College. He has abiding interests in the use of scripture in the life of the church and the world, particularly in the context of ecology and justice. Specific interests include creation theology, faith and science dialogue, the Psalms, and wisdom literature (Proverbs, Job, and Ecclesiastes).  Recent books include The Seven Pillars of Creation: Bible, Science, and the Ecology of Wonder (Oxford University) and Wisdom’s Wonder (Wm. B. Eerdmans). Recently, he helped Columbia Seminary earn one of 10 grants totalling $1.5 million awarded by the American Association for the Advancement of Science to integrate science into the seminary’s curriculum.