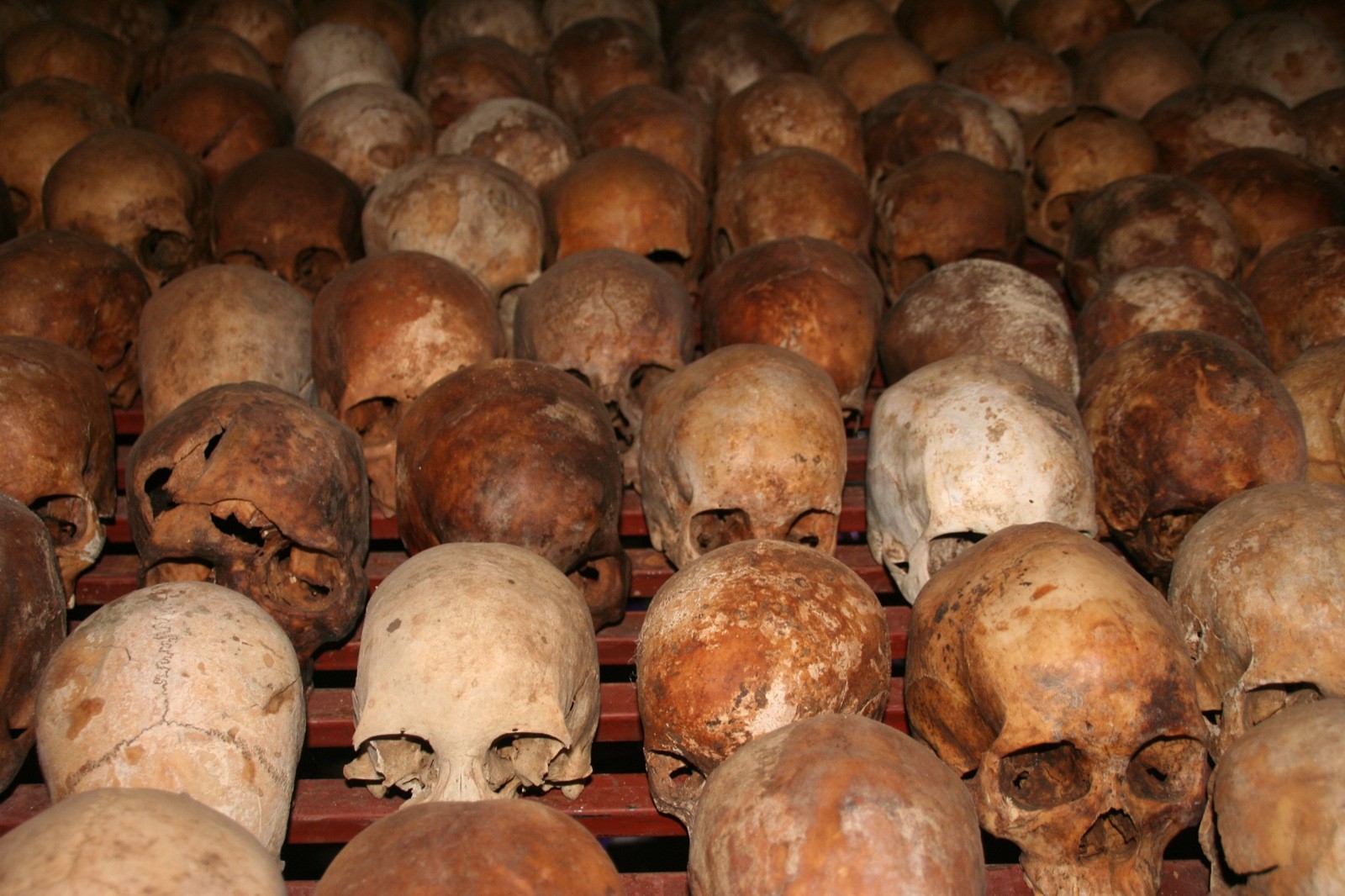 I was once asked to lead a Bible study at my church. I agreed before learning that the subject was ‘Genocide in the Bible.’ I’d never before taught on the subject, and in fact, I had very little teaching experience in general at that point. So I did the logical thing, I opened the book of Joshua (where the problem appears most starkly) and searched it line-by-line for some ray of light. What I found in Joshua surprised me. Joshua wasn’t what it had seemed on the surface.

Talking about Violence in OUR Bible

My anecdotal observation is that the concern to address violence in Scripture derives from at least four primary sources. First, within the church, there is an increasing move toward authenticity as an ideal, or even a virtue, for Christian community. This applies to the way we relate to one another and our sacred texts. The desire is to face honestly the Bible we actually have, and not the one we’d like to have or that tradition has told us we have.

Second, the turn toward the problem of biblical violence derives from the awareness that biblical writers were not ideologically neutral. Isn’t it convenient, many would suggest, that Israel’s claim to the land in Joshua is commanded by God and morally justified by the horrific practices of Canaan’s previous inhabitants? It sounds like a set-up. Closely linked to the ideological sensitivity is an historical sensitivity to the yawning gap between how ancient cultures thought about God and violence and how we now view God and violence.  The idea that Joshua, for instance, offers a ‘tribalistic’ view of Israel’s deity is commonplace.

Third, in an increasingly pluralistic context many feel that Scripture is ‘on trial,’ so to speak, needing to answer for its crimes. Christians often recoil at the sight of violent passages in the Koran, but we have our own ‘texts of terror.’[1] Moreover, as with the Koran, we have passages that are easily misunderstood if taken out of context and created into a meme. Take Jesus’ words in Matthew 10:34 as an example: ‘Do not think that I have come to bring peace to the earth; I have not come to bring peace, but a sword.’ These texts provide easy targets for those who want to see Christianity crumble and they provide confusion for others.

For many, violent texts raise moral questions about God, and not just the Bible. According to Richard Dawkins, for instance:

The God of the Old Testament is arguably the most unpleasant character in all fiction: jealous and proud of it; a petty, unjust, unforgiving control-freak; a vindictive, bloodthirsty ethnic cleanser; a misogynistic, homophobic, racist, infanticidal, genocidal, filicidal, pestilential, megalomaniacal, sadomasochistic, capriciously malevolent bully (The God Delusion, 51)

Dawkins brushes quickly by the God of the Old Testament, because he feels it unfair to only attack God’s ‘most unlovely instantiation, Yahweh,’ and finds similar things to say about the God of the New Testament. Though few of us feel compelled by Dawkins’ black and white caricatures, we may nevertheless feel that he has a point, that the Old Testament offers a great deal of raw material out of which to construct a hateful ideology, whether it be allegedly ‘cautious’ xenophobia or decisive violence: ‘You must purge the evil from your midst’ (9x in Deuteronomy).

This leads to a fourth point: There’s a deep concern that biblical texts can be taken up to perpetuate or justify violence. From the Maccabean revolt to modern warfare, the Bible—and especially the book of Joshua—has provided religious backing for violent ambition. At a domestic level, Christians have appealed to biblical texts on men and women to justify violence against spouses.

I’m convinced that navigating the challenging waters of violence in the Old Testament requires a multi-pronged interpretive approach. There’s no obvious or plain sense of the text to which we can appeal for a quick resolution, and getting into a proof-texting war is rarely helpful. You can’t just quote ‘love your enemies’ when confronted with the challenge of violence in Joshua. Addressing one of the most pressing biblical issues of our time requires careful and sensitive reading, the kind of reading that eats up lots of time, prayer, and reflection. This is challenging, and requires us to step out from behind meme-based discussions on this topic and toward deep and prayerful engagement with the Bible.

Too often, however, Christians are shielded from the problem itself. Shielding can happen in at least three ways: (1.) Ignoring troublesome passages by quoting other verses more loudly and often. (2) Rushing quickly to abstracted ‘takeaways’ from otherwise troubling texts. For instance, Joshua can become a model for leadership in the face of challenges. (3.) Brushing aside concerns over violence with moralistic answers: ‘Of course the Canaanites were all sacrificing their children to Molech, so they had to be wiped out.’

The problem with shielding is not only that it leaves problems unaddressed. It also leaves Christians unprepared for external critiques or their own faith crisis. As a matter of discipleship in the Church, evangelistic preparation, and moral and intellectual honesty, we need to consider how to respond to questions about a God who apparently asked his people to kill every man, woman, child, infant, and animal in the land of Canaan. For many of us, this defies every sense of goodness and morality that could possibly be attributed to God.

As a first step, it’s important to face the problem itself. Here’s God’s command through Moses in Deuteronomy 7:1-2, later enacted by Joshua:

When the LORD your God brings you into the land that you are entering to take possession of it, and clears away many nations before you, the Hittites, the Girgashites, the Amorites, the Canaanites, the Perizzites, the Hivites, and the Jebusites, seven nations more numerous and mightier than yourselves, and when the LORD your God gives them over to you, and you defeat them, then you must devote them to complete destruction. You shall make no covenant with them and show no mercy to them. (cf. Deut 20:16-17)

The idea of ‘devoting’ the Canaanites ‘to complete destruction’ (Hebrew herem) reflects the idea that Israel was to destroy completely the Canaanites, and then dedicate them and their wealth to God as a sacred offering. Moreover, they were to specifically deny mercy (or, in Hebrew, favour) to these nations. Several texts in Joshua suggest that the people dutifully obeyed (Josh 6:21; 10:40; 11:11-15). As Joshua and the people entered the land, they struck down entire peoples, ‘devoting them to destruction.’ Note Joshua 6:21 as an example:

Then they devoted all in the city to destruction, both men and women, young and old, oxen, sheep, and donkeys, with the edge of the sword.

The inclusion of children and animals puts to rest any argument that this was about the moral degeneracy of the Canaanites. In fact, Joshua never uses the sin of child sacrifice or any other moral failing as the reason for Israel killing the Canaanites, as in other Old Testament texts.[2] They were simply in the land. Moreover, Joshua tells us the following:

For it was the LORD’s doing to harden their hearts so that they would come against Israel in battle, in order that they might be devoted to destruction, and might receive no mercy, but be exterminated, just as the LORD had commanded Moses. (Josh 11:20)[3]

At the very least, we have to concede the deep tension between these texts and what we learn of God from other places in the Bible, and most certainly, in Jesus.

But we don’t have to just sit content with the tension, or with the idea that genocide is the best or last word on Joshua. I don’t think this is a pill that anyone who takes the Bible seriously just needs to swallow and joyfully embrace.

In many ways, the book of Joshua is deeply subversive of any such approach. But to see this requires some unpacking. In the next few posts I hope to lay out a few approaches to Joshua that I’ve found helpful and illuminating on the subject of violence. Joshua is probably the most contested violent text within the OT precisely because of its apparent celebration of genocide. If there is a place where Christians need to confront the problem of biblical violence, it is here.

The next post will look at how Joshua challenges readers’ views of who’s included and who’s excluded, and consequently, how the book itself poses serious questions around the call to total and uncompromising destruction of the Canaanites.

[3] NRSV, slightly modified to reflect the Hebrew verb חרם, ‘to devote to destruction.’