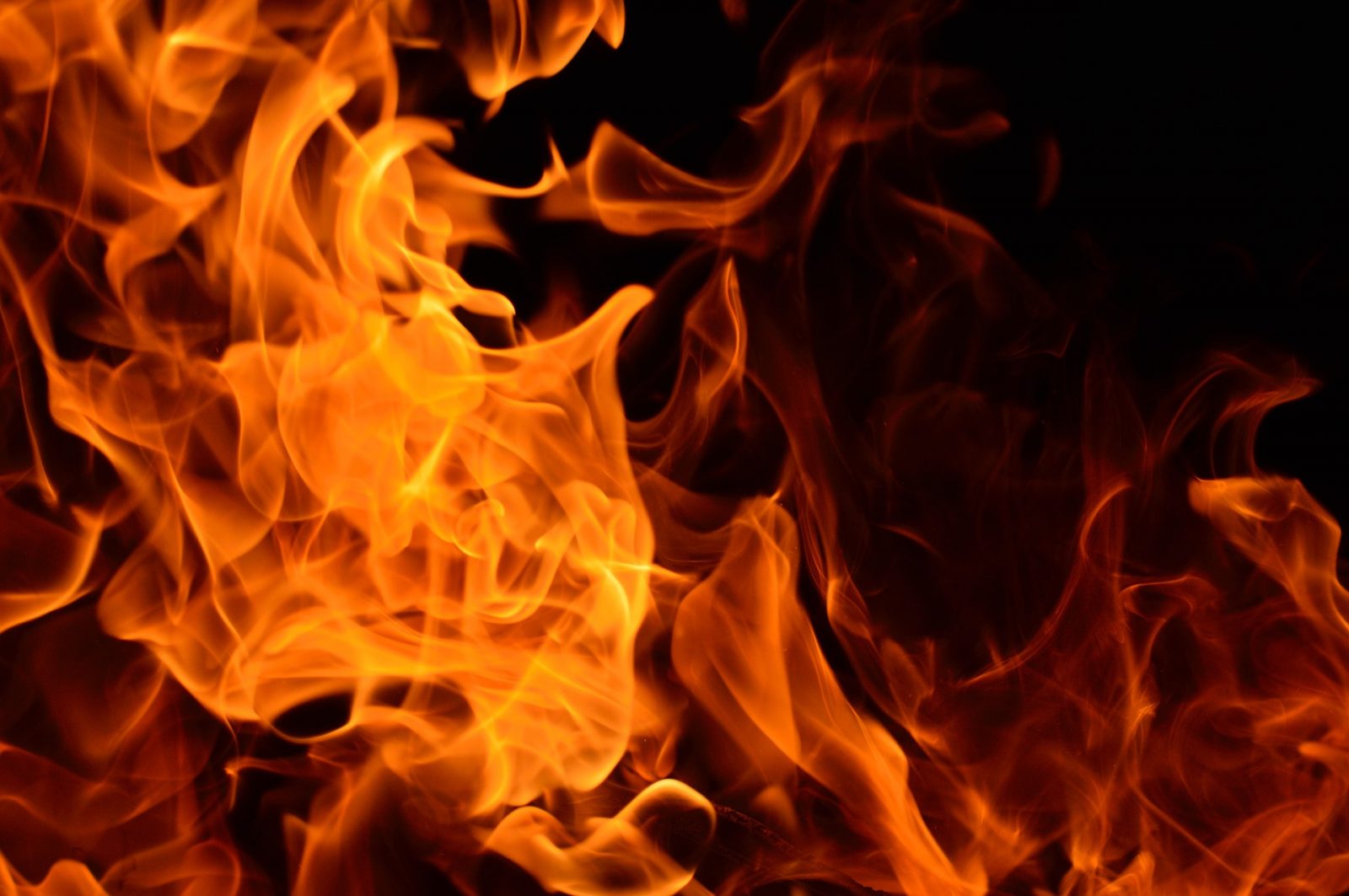 (on fixing the problems of violence and wrath in the Bible)

When preparing to teach on violence in the Old Testament recently I was reminded of a book review I once read. The reviewer recounted his neighbour’s efforts to remove a grease stain from his garage floor. The neighbour dumped a few gallons of gasoline on the floor and scrubbed. It worked beautifully. The stain disappeared completely. Job done!

However, there was a slight problem. The gasoline fumes filled the garage and were eventually ignited by his boiler’s pilot light. The great conflagration that ensued ended up burning his entire house to its foundations.

This story offered a warning that stuck with me: Turn off your mobile phone at the pump, you ask? Yes, but also, beware of solutions that too easily resolve. They might be highly combustible!

This is a basic, but often missed, principle that applies to thinking through all sorts of knotty problems in theology. Answers that resolve problems too neatly and easily usually have hidden costs or trade-offs that don’t surface at first glance. Only by prodding and testing do they begin to emerge.

Two of the most common problems on which interpreters reach for the gas can are divinely sanctioned violence and divine wrath (I can see you reaching for it already!).

Easy resolutions to the problem of violence often look like one of the following two approaches:

The first looks at an issue like the Canaanite genocide and says, ‘Sin is sin, so of course God is justified in his command to destroy every man, woman, child, and infant in Canaan without mercy!’ The assumption here is that the one asking the question might not take seriously enough the problem of sin, or they do not have a sufficiently high view of God’s holiness and sovereignty. If they did, the problem would disappear. I’ve even heard one person ‘resolve’ the issue using eschatology, suggesting that Joshua is a case of ‘intrusion ethics.’ God’s eschatological judgment had broken into history and wiped out a few thousand as a foretaste of the billions he would destroy at the end of time. This displaced and augmented the problem.

The second easy resolution says, ‘Well of course the Canaanite genocide never happened,’ or, ‘The conquest story is the projected fantasy of a primitive tribalistic people.’

Both approaches pour gasoline on the problem … often with unintended consequences. The first approach ignores (or destroys) the rich tradition of protest against divine judgment that we see demonstrated in individuals like Abraham (Gen 18) and Moses (Exod 34; Num 12, 14, 16, 21). It also misses out on the rich complexity of Joshua’s message, which seems to question the fundamental division between ‘us/good’ and ‘them/bad’ that a surface reading of the book suggests (e.g., Josh 5:13-14). The second, which states the non-historicity of the Canaanite genocide, pretends to remove the problem but only shifts it. Now we’re saying that this is how God wants to be portrayed, even if it didn’t happen. And calling the ancient Israelites ‘primitive’ is just arrogant, and like the first approach, leads readers to miss much of Joshua’s theological depth.

Rather than rushing toward either resolution, perhaps we should explore the cost of doing business with them, avoid representing the biblical writers as our intellectual and moral inferiors, and adopt a posture of empathetic listening and faithful questioning. Perhaps we should read Joshua slowly. Let it disturb, surprise, and unsettle. As someone who has done this, I can only say that it repays such efforts abundantly.

Divine wrath is also a problem on which many want to pour gasoline … and they have for a long time, going back at least as far as the early 2nd century heretic Marcion (not a fan of Yahweh). Marcion wanted to do away with divine wrath, and with it, the Old Testament. He found it unbecoming of God’s goodness. In his critique of Marcion, Tertullian writes: ‘A better god has been discovered, who never takes offense, is never angry, never inflicts punishment, who has prepared no fire in hell, no gnashing of teeth in the outer darkness! He is purely and simply good’ (1.27).

But here’s Tertullian’s insight—there are always hidden costs to pictures of God that eliminate challenging tensions. In this instance, Tertullian claims that Marcion eliminates God’s ability to act as judge: ‘You allow indeed that God is a judge, but at the same time destroy those operations and dispositions by which He discharges His judicial functions’ (Adv. Mar. 2.16). For Tertullian (and many biblical texts), wrath is the emotion that animates God’s active concern for justice. Criticizing his wrath was like criticizing the instruments of a doctor. Wrath, in Tertullian’s formulation—and arguably in the Bible itself—is tied intimately to God’s exercise of justice.

Tertullian is highlighting the inseparability—or at least the complex interaction—of wrath and justice in God. In Exodus 22:21-24 for instance, God warns Israel that if his people cause the orphan or widow to cry out, ‘my anger will blaze.’ He would come in judgment upon those who cause such an outcry just as he came against Egypt. The point of these verses is not to be precise about the exact penalty for oppressing the weak, but to express the pathos of God in the face of injustice. For Israel, Mark Smith points out, God’s wrath was bound up in the idea that he was the protective father of the vulnerable—whether they be individuals or his people Israel. Wrath—like jealousy—was seen as a sign of concern for the weak against any who would put them at risk or threaten his legitimate claim to parentage. In this sense, God’s wrath toward the nations (e.g., for their mistreatment of Israel) was a deep expression of his love over and for his people.[1]

For many of us, associating wrath with love is strange. But love in the Old Testament is grounded in the idea of Israel as God’s covenant people (Deut 6:4-5). Love was the relational glue between covenant partners. And if we think of covenant in terms of ‘family substitute,’[2] love was the trusting loyalty required for healthy family cohesion, while God’s wrath was his protective rage aimed at threats to that family (internal or external).

But we can’t swing the pendulum away from mercy toward wrath, as if wrath could never become a problem. Abraham and Moses certainly recognized this on many occasions—and even challenged God to exercise mercy! Tertullian, who defended God’s wrath against Marcion, urges us to weigh God’s ‘severity’ against his gentleness and observe the imbalance (Adv. Mar. 2.17). As I tell my students at WTC, God’s character is wildly imbalanced. The coexistence of wrath and mercy is not that of equals. If we take the language of mercy vs. wrath in Exod. 34:6-7 in strictly mathematical terms (love to ‘thousands of generations’ : ‘3-4 generations’ of judgment) God’s mercy outweighs by at least 500:1!

But for important reasons, these verses—which are central to an Old Testament portrait of God—keep God’s mercy and judgment sit together, even if they are imbalanced. Perhaps we lose something when we lose judgment and wrath, and perhaps we lose something when we toss aside violent texts as purely human projections. Maybe there is an understanding of God’s character that only comes by exploring the revelatory value of the most troublesome texts and by teasing out the complex characterization of Israel’s God that Scripture offers.

The subjects of wrath and violence are uncomfortable. But I suggest that how we handle them, and not just the topics themselves, is what poses the greatest danger. We will not all land in the same place on these topics, but what if we at least stop and explore the cost of doing business with easy resolutions? Let’s keep the roof over our heads.