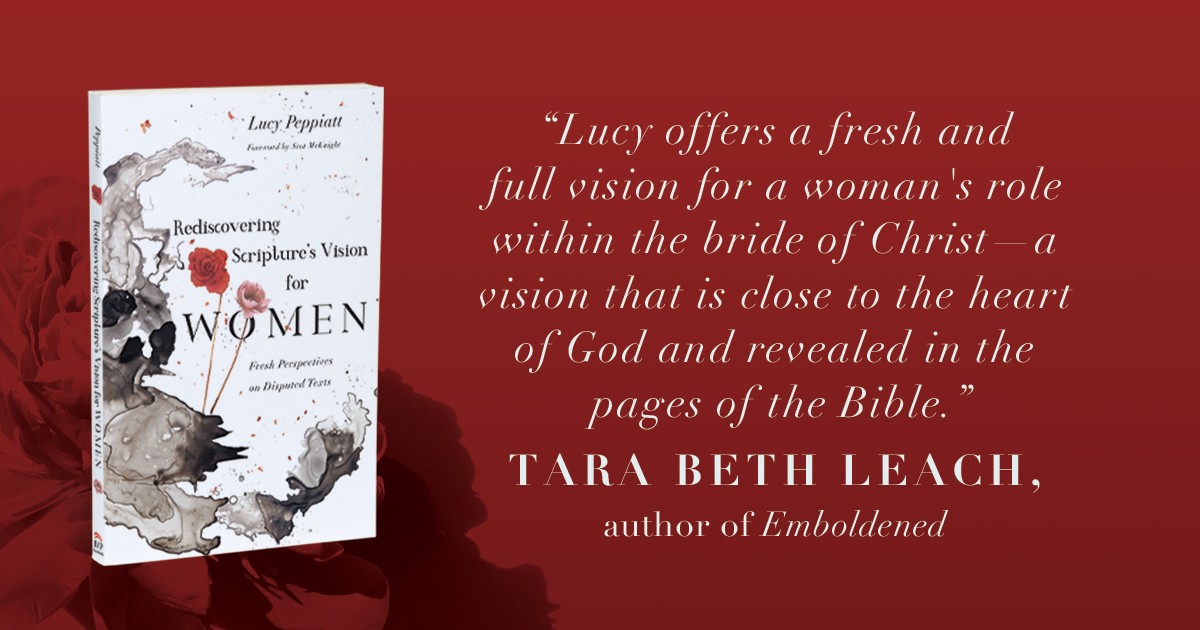 Why I wrote ‘Rediscovering…’

I have a new book coming out in a couple of weeks (Aug 6) and I received my copies yesterday. It’s funny receiving the hard copy of the book that you’ve worked on and read and re-read over and over again—a mixture of excitement and relief.

I don’t recall whether I ever really wanted to write a book about women and the Bible and how and why I believed the Bible gives us a mutualist vision for men and women. I think maybe I did, but it was all rather vague. Then there was part of me that definitely didn’t want to write or be known as a person who speaks and writes about women. I had lots of reasons: Why should I have to defend something I was sure about in the first place? I’ll let someone else do it – they’ll do a much better job than I would. Someone else can take the flak. I want to spend my time writing and thinking about theology and not fighting battles about women. I suppose it was a mixture of frustration, vanity, fear, and boredom with the subject that put me off. All of this was sort of strange because I’m a feminist and have been since I was a teenager, so it was hard for me to admit my own reluctance.

I do have a vivid memory, however, when something changed although it would be years until I did anything about it. I was in London for a day and had some time to kill while waiting for an appointment in Marylebone. I passed a church which happened to be open and so I walked in. It was open because someone was practising the organ. The music was beautiful, and I was the only other person in there. I sat there for a while enjoying the music and then found myself praying. There was lots of prayer needed in my family at the time and there was much on my mind, so I wasn’t expecting what happened next.

I don’t feel able to describe in detail what happened in the church, but I know that I heard from God when I was in there. I walked out of the church knowing that God had asked/told me to speak up about women in the church and I also knew that it was now a fait accompli. It was, if you like, a call, and like all calls of God, it was marked by certain characteristics that I’d come to recognize. It seems to begin with a sense of having received a request that is not really a request at all, but instead an imperative. There is no real choice after that, only possibly a choice about timing, maybe, but really only a choice to trust or not, and a knowledge that at some point, you will have to act. But as part of you (often reluctantly) resigns yourself to the reality that God has asked you to do something that you can’t and mustn’t say ‘no’ to, it begins to dawn on you that he may have engendered (or uncovered?) a desire in you to do that very thing. I have to admit that the desire to act came many years later and was never really overwhelming. It came more in the form of determination than anything else.

What I do remember, and has never left me, was that for the first time I cared—in an emotional sense—about the women in the church who had carried the pain of exclusion, disbarment, shame, marginalization, and rejection. I cared that they were hurt, and I cared that they had carried this because of poor theology that had won the day for so long, in so many parts of the church in so many parts of the world. At the same time, I felt the weight of the privilege of having had countless opportunities, so much education, and an abundance of support and love through a whole lifetime. The very idea of not speaking up suddenly seemed unthinkable. What was I thinking? Who did I think I was?

It was about 5 or 6 years after the time in the church in Marylebone that I began to reflect seriously on women, the Bible, and the church. In 2012 I found myself leading a theological college—more by default than anything else! In 2013, it was formalized with my appointment to principal. Once I was in this position, serving an evangelical constituency, I was constantly asked what I thought about women in leadership. The pressure was mounting for me to do my own research.

I began by studying 1 Corinthians 11, foolishly thinking it would take me a couple of days to get my head around Paul’s views on women. It took me months and months stretching to years of fascinating research. As a result of that I wrote two books, one on 1 Corinthians 11-14 and one on just 1 Corinthians 11:2-16. So that was it. I’d written on women, the Bible, and the church—in a scholarly context, but with implications for the role of women in the church today. I thought I was done with writing on women then, but it turned out that wasn’t the end.

Through my work on 1 Corinthians, I met the wonderful Scot McKnight and we became friends. He thought I should write a more general book on women and the Bible. I thought he should do it. See who won­? No surprises there!

Scot introduced me to Dan Reid and Cindy Bunch at IVP Academic. They thought there was a need for more literature. I wasn’t sure. There are a lot of good books out there on women. Plus, none of my original objections had gone—I’m not sure they ever really have. But Dan and Cindy and I had a good talk and I liked them. I shared an idea with them and they responded positively, but even then I got cold feet further down the line. However, before he retired and handed me over to Anna Gissing, Dan said something like this to me, ‘Lucy we’d hoped we’d solved this 30 years ago, but we didn’t. And in some ways, things have got worse. So we need to say it, and say it again, and keep saying it.’ Other people have said similar things to me since. Dan strengthened my resolve.

The third thing that influenced me was that as someone who had begun to speak up about women and about what I saw as a mutualist vision in scripture, I was always being asked the same questions. Whenever I spoke about 1 Corinthians 11 and 14, people would always ask me, but what about 1 Timothy 2? And what about marriage? And what about the creation story? I realized that the hierarchicalist view of men and women was a whole big picture, a whole network of thought all tied around a collection of verses all used to interpret one another. I knew then that I had to think through the whole thing and not just the set of verses in 1 Corinthians that I knew so well. As I did that, I began to write the book.

The last thing that influenced me was that I met one person after another after another who would say to me that they had had an instinct, a gut feeling, an intuition, or a sense in their spirit that male-only leadership and the submission of women to men was wrong. They sensed that it wasn’t actually ‘biblical’ as they had been told, and they felt that women are called equally with men to serve in all capacities in the church and the world. All sorts of people with all sorts of temperaments would confide in me: young, gifted, vocal women, elderly gentlemen, dads with growing daughters, gentle middle-aged women, newly-weds—young, old, male, female, feisty, obedient. They knew there was something wrong in what they’d been taught, but they didn’t know what to say in response. I wrote Rediscovering for all of them.

And so I wrote the book for multiple reasons. The first was I felt I had no choice, thanks to God. The second because my personal curiosity and love of Paul drove me in that direction. The third because I felt the pain of excluded women and I wanted to help. The fourth because I wanted to at least try and answer all those questions that I’ve been asked over years and years.

Here’s how I end ‘Rediscovering’:

‘In Dallas Willard’s foreword to the book How I Changed My Mind About Women in Leadership, he begins, “When Alan Johnson kindly asked me to contribute a chapter to How I Changed My Mind About Women in Leadership, I had to tell him that I had not changed my mind on this point, and thus could not contribute.”[1] Willard had always believed that women could lead, teach, and minister in all capacities in the church. For those of us, like Dallas Willard, who never needed to change our minds, I hope we continue to encourage others. My deepest hope and prayer, however, is that Scripture will not be misused to oppress, suppress, restrain, silence, belittle, demean, and exclude women in any shape or form. I hope and pray, instead, that the promise of the Spirit for freedom, for reconciled relationships, for healing will be realized in the church through the Word of God, for our own sakes, for God’s sake, and for the sake of the world.’