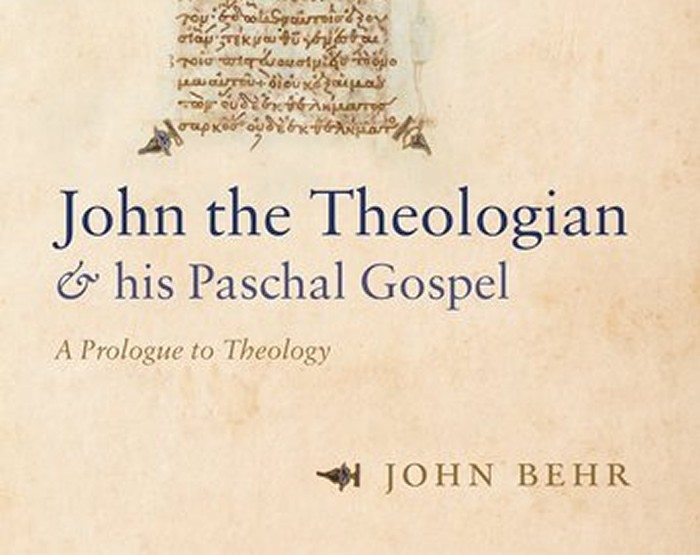 Behr’s monograph offers a distinct perspective that situates John’s Gospel unequivocally within the Eastern Orthodox Paschal feast: “Pascha . . . is the starting point and register in which to hear the Gospel of John and also its Prologue” (ix). According to Behr, John the Elder, writer of the Gospel began the Orthodox tradition. The crux of Behr’s thesis is that John 1:14 ought to be viewed, not as a historical event in which the Word becomes flesh, but rather, “as the ongoing embodiment of God in those who follow Christ” (viii). Behr meticulously builds his case in three stages—historical investigation, scriptural exegesis, and philosophical reflection. The research draws from early patristic writings, modern Johannine scholars, and is supported by interdisciplinary engagement that utilises the works of Quentin Skinner, Herbert McCabe, and Michel Henry.

In the introductory section, Behr decries what he views as the elevation of the incarnation over the Passion by Johannine interpreters (4). “An episode in the biography of the Word” coined by Rowan Williams, is the key phrase Behr uses in his critique of the predominant interpretation of the incarnation; the phrase recurs over thirty times. Using the historian Quentin Skinner’s “mythology of doctrines” Behr rejects the commonly held notion that the Prologue articulates a theology in which the pre-incarnate Logos of 1:1-2 is born into the world and takes on the form of humanity. The term “pre-incarnate” argues Behr, ascribes the notion of temporality to divinity. Furthermore, he continues, this “mythological” understanding of the incarnation is not inscribed in the creeds of Nicaea, Constantinople, or Chalcedon, and the term “pre-incarnate” is absent in patristic literature. According to Behr, patristic theologians of the Early Church understood the incarnation in terms of the cross, and they did not read the Prologue as a narrative of the Logos who becomes incarnate by being born in the world. Behr articulates his main argument in the following protracted sentence:

The becoming flesh of the Word speaks not of the birth of a  ‘pre-incarnate Word’ but of Jesus’ ascending the cross to the Father to be identified as the apocalyptic Son of Man whose flesh is in turn brought down from heaven to be eaten, so that he dwells in those who see his glory and who themselves take up the cross to become his witnesses, born of God in their own martyrdom and born into life as living human beings, the glory of God, the completion of the Temple, and perfection of God’s stated purpose in the opening chapter of Scripture, that is, to make human beings in his image (5).

To establish the supposition that the annual celebration of Pascha is a Johannine tradition, Behr’s first chapter builds up the case for a direct link between the writer(s) of the Fourth Gospel and the early Church Fathers. Bringing up the longstanding discussion regarding the relationship between John the Apostle and John the Elder, and which of these two penned the Gospel, Behr turns to Papias, Irenaeus, and Eusebius as historical witnesses. His conclusion is that the Gospel originated with John the Elder who formed “the School of John” (63). The chapter then presents John as “High Priest of the Paschal Mystery” by recalling the Quartodeciman controversy in which Pope Victor I of Rome broke communion with churches in Asia because of differences in dating the Easter celebration. Thus, Behr posits that John is the originator of the Quartodeciman paschal tradition because it is only in his Gospel that Christ is crucified on Passover (92). Behr also appeals to Polycrates and Josephus in referring to John as a priest (93). Through this portrayal of John the Elder as writer of the gospel and “high priest of the paschal mystery”, Behr sets the stage for his unconventional reading of the Gospel.

Chapter two lays out an apocalyptic framework for the book. John’s Gospel, explains Behr, does not fit into the traditional genre of apocalyptic literature, but rather, into the category of “apocalyptic eschatology” (110-114). Behr explains the axes of his apocalyptic framework in terms of mystery, revelation, riddle and the above/below motif in the Gospel. The gospel is preached as a mystery hidden throughout the ages in Scripture but is now apocalyptically revealed (115-116). The riddling discourses in the Gospel present Jesus words as mysterious, however, as the Son of Man he communicates revelation, and then returns to the heavens with the promise to send the Holy Spirit (119-122). Behr prescribes reading John as an apocalyptic narrative, starting with the cross (128).

The exegetical core of Behr’s work emerges in chapter three where he portrays Christ as the Temple and fulfilment of the Jewish feasts. Behr explains how John has arranged his presentation of Christ according to the Gospel’s six feasts. As expected, Behr’s charting the Temple motif begins with the word ‘dwell’ in John 1:14 where Jesus is portrayed as the dwelling place of God, replacing the Tabernacle and Temple (139-140). Behr then traces the temple imagery through the rest of the Johannine narrative. Crucial for Behr is his exegesis of 6:53, “unless you eat the flesh of the Son of Man and drink His blood, you have no life in yourselves.” Behr views this saying as “eucharistic terminology” with its fulfilment in the death of Christ, proclaimed by the eating of the bread and drinking of the cup (152). It is at this point that Behr introduces his idea of “eucharistic martyrdom”:

Jesus. . . through offering his flesh for the life of the world by ascending the cross descends as the Son of Man offering his flesh and blood, the ‘true food’, the bread descending from heaven to be chewed by Christians on their way to their own eucharistic martyrdom, becoming the ‘pure bread of Christ’, born into life, and becoming a human being (160).

In chapter four, Behr explains his understanding of the term ‘human being’ in the Gospel of John. According to Behr, the Johannine concept of human being points back to Genesis 1:26, which has now been completed in the Passion and in those following Christ in martyrdom (218). To be a living human being is to be a martyr and the glory of God. Behr, offers four witnesses to back this claim, namely Revelation 20:4, Ignatius of Antioch (Smyrn 4.2; Eph 20.1), Irenaeus of Lyons (Haer. 4.20.7), and Melito of Sardis (On Pascha). Behr then examines passages in John which he believes reflect this idea of the human being as a martyr. His extended discussion of the figure of the ‘woman’ (2:4; 16:20–22; 19:26), leads to his conclusion that the Church is the true ‘mother’, Christ the true ‘human’, and Christ’s followers are born through martyrdom (216).

Next, Behr delves into the Gospel’s ascending and descending motif and examines eight passages in which the term ‘Son of Man’ occurs. John the Elder and his school, claims Behr, understood Pilate’s declaration, “Behold the human being” (19:5), in the sense of martyrdom (229). Therefore, the descent of the Son of Man into the world occurs in Christ through the cross and in his followers, through martyrdom (233). Behr’s understanding of ‘human being’ and the apocalyptic Son of Man in John paves the way for his interpretation of the Prologue in context of the crucifixion.

In chapter five, Behr’s aim is to counter the predominant approach that interprets “the Word became flesh” in 1:14 as the incarnation of a pre-existent divine being who takes on human form and becomes Jesus Christ, the Incarnate Word, God now visible in the flesh (246). Contrariwise, Behr espouses Herbert McCabe’s claim that the idea of the ‘pre-existent Christ’ or the ‘pre-incarnate Word’ was invented in the nineteenth century to distinguish the eternal procession of the Son from the incarnation (247-248). Behr places Jesus on the Cross in John 1:1, stating, “Jesus is in first place on the cross, as the head of the body, as the king in authority upon his throne” (260). For Behr, John 1:12–13 and 14 refer to baptism and Eucharist; these verses are based upon the crucifixion, and lived out in martyrdom by Christians taking up the cross to become living human beings, the glory of God (267).

The discussion in chapter 6 is deeply immersed in the complex phenomenological philosophy of Michel Henry. Henry’s philosophical premise regarding the NT is that the texts do not offer access to the Truth, rather, Truth alone offers access to itself, giving understanding of the text (299). Points from Henry’s philosophy employed by Behr include the following: 1) Christianity and its phenomenological structure is based on a contrast between truth in the world and Christ in whom is life and Truth (275); 2) life is understood as pathos or suffering (278); 3) it is in the pathos of living that the ‘self’ exists (279); 4)  to ‘see’ Christ is to share in the pathos of his life (281); 5) to be born does not mean to come into the world, but to ‘come into life,’ and this is what Henry sees expounded in John’s Prologue (280-281). Hence for Henry, incarnation is not about the Word coming into the world by taking a corporeal, material body, but rather, to experience the pathos of life (287-289). “We have seen his glory” in John 1:14, therefore, is the revealing of the suffering, pathos-filled flesh of Christ (292). In addition to Henry’s phenomenology of the flesh, Behr also draws on the philosopher’s notion of ‘Arch-intelligibility’ and ‘Arch-passibility.’ According to Henry, Arch-intelligibility is an Arch-passibility in which the Word has taken on flesh (304). It is from this philosophical premise that Behr conceives ‘Johannine Arch-intelligibility’, wherein life is revealed and known only in the pathos of the flesh (305), namely suffering.

In the concluding chapter, Behr wraps up his work with a summary and reiteration of his belief that the incarnation is “a participation in the life-giving flesh of Christ, incorporated as his body in the life of witness or matyria” (323). Behr then offers readers three principles for understanding his research as “a prologue to the task of theology”: 1) theology is concerned with the crucified Lord Jesus Christ embodied in the broken bread and those who partake of his life-giving flesh (324); 2) the Lord Jesus Christ becomes human through the Passion (326); 3) the way Christ dies shows what it is to be God and also what it is to be human (327). Thus, for Behr, theology begins at the cross and the incarnation is God becoming human through the cross and humans becoming ‘gods’ “embodied in bodies, earth becoming living flesh, aflame with the divine fire, the glory of God” (330).

Behr is to be commended for his extensive historical research, distinctive perspectives, insightful discussions, and engagement with a wide range of patristic and modern theological exegetes, historians and philosophers. However, his divergent reading of the Fourth Gospel, as rooted in the sacramental, liturgical, and mystical precepts of Greek orthodox tradition presents some difficulties. Behr’s primary goal to abandon wholesale, the conventional reading of John 1:14 and interpret the incarnation exclusively in context of crucifixion and martyrdom causes him to push the hermeneutical boundaries of the Johannine text to the limit. The complex interpretative framework, which is heavily dependent on an existential phenomenological philosophy that discards the substance of the scriptural text, has resulted in some exegetical leaps that seem implausible. The main question is: Does Behr’s interpretation of “the word became flesh” as Jesus ‘becoming human’ on the cross, and equation of “we beheld his glory” with the martyrdom of believers, pass muster? In the final analysis, Behr’s proposition to constrict the reading of the Prologue solely into the Greek Orthodox celebration of Pascha, leaves the reader wondering if the only gospel that omits eucharistic details of the Last Supper can, according to his claims, be called the ‘Paschal Gospel’.