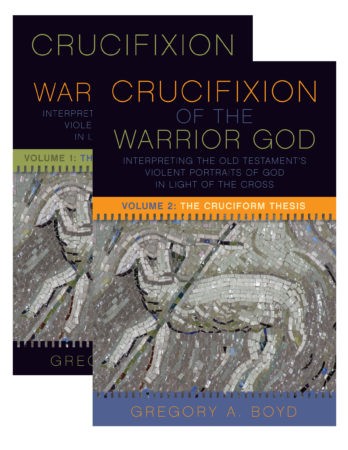 Gregory A. Boyd. Crucifixion of the Warrior God: Interpreting the Old Testament’s Violent Portraits of God in Light of the Cross. Minneapolis: Fortress Press, 2017.

Like most kids from Christian backgrounds, I grew up hearing the stories of flood, conquest, and war that we find in the Old Testament. These flannel-graphed (fuzzy-felt for Brits) stories captivated my imagination, and formed me in important ways. As I grew older, I learned the paleological arguments for a literal global flood, and the archaeological arguments for the destruction of Jericho. Those arguments built my faith, and gave me confidence—within a literalistic framework—that the Bible was true.

It never occurred to me that the same stories that built my faith were also horrifically violent. Perhaps it was the abstraction of violence in children’s Bibles, or the ‘moral of the story’ approach to the Old Testament, which shifted the focus elsewhere, but I didn’t ever mind the violence. That didn’t happen until later. I can’t remember the first time I grew uneasy with biblical violence, but I do remember that reading Richard Hays’ Moral Vision of the New Testament at the end of my undergraduate studies made a deep impression on me. Hays makes a powerful case for non-violence in the New Testament. I found it convincing at the time, and as a consequence, the radical non-violence of Jesus and the early Church caused me real problems as I read backward toward the Old Testament. The violence suddenly seemed at odds with Jesus’ teachings, and most significantly, his death for, and forgiveness of, enemies on the cross. This sent me on a challenging and difficult search through the Old Testament, looking for ways that the Old Testament might at least point toward Jesus.

In his Crucifixion of the Warrior God, Greg shares a similar story. Not all parts of his story are the same, but he describes how he became increasingly drawn toward Jesus’ radical non-violence. This experience prompted his first attempt to ‘put the best possible “spin” on the OT’s violent portraits of God’ (xxix). His hope was that this would resolve the tension Jesus ‘affirmation of the OT as divinely inspired’ and Jesus’ ‘nonviolent revelation of God’ (xxix). But unable to put a positive spin on the OT, he went back to the drawing board to propose something different. The result is a 1,445 tome. It’s a hard-hitting, astonishingly well-read, and deeply creative work.

I don’t plan to rehash all the arguments in Greg’s book. At 1,445 pages, it’s too large for that. Greg covers a wide range of topics, to say the least. I suspect that some will fizzle out before reaching Volume 2, when Greg actually interprets OT texts, limiting the impact of some of his richer insights. This isn’t a comment on his writing, but instead on the simple challenge of reading a long book.

Here are a few key insights from Volume 1. I’ll offer some comment, but will save most evaluation for later posts:

In the next posts I’ll review and evaluate several specific portions of Greg’s weighty tome.

[3] Special thanks to Lucy Peppiatt for raising this point. Lucy notes Ian McFarland’s query on this point, from his book The Divine Image: Envisioning the Invisible God (Minneapolis, MN: Fortress Press, 2005), 13-14: ‘We see and know God when and as we look at Jesus as the one, true image of God. As the myriad images of Jesus that mark Christian literature and iconography show, however, there is no shortage of mutually inconsistent pictures of Jesus to choose from; and the fact that Jesus himself is now confessed to have ascended to heaven does not help matters.’ pp.13-14.