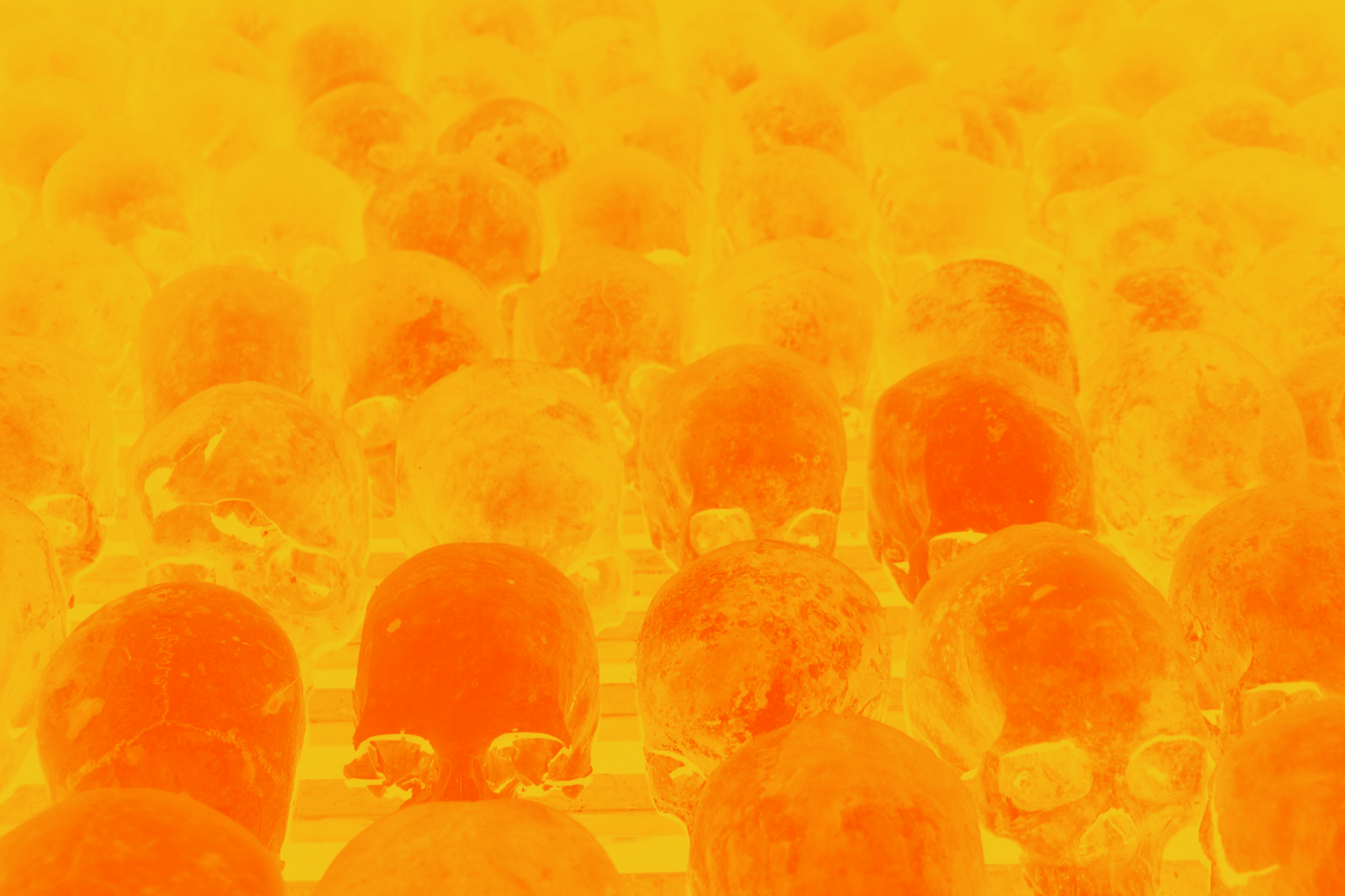 The book of Chronicles tells of a story where King Jehoshaphat of Judah faced an enemy coalition of some 2 million soldiers, or just a few shy of modern China’s active military. The story is clearly engaging in some hyperbole, since the size of this army alone is well beyond all human population estimates for this time. The author is painting something larger than life, with the odds stacked against Judah. The central questions driving the narrative appear in Jehoshaphat’s desperate prayer in the courtyard of the temple: ‘Are you not God in heaven? … Did you not, our God, drive out the inhabitants of this land before your people Israel?’ Based on God’s actions in Joshua, Jehoshaphat builds to his point: ‘O God, will you not execute judgment on them? For we are powerless.’ (2 Chr 20:6-12).

The inflated imagery in this story suggests that the story-teller isn’t doing historical realism. He’s using impressionism or cubism. The artist is accentuating the staggering odds, Judah’s powerlessness, and most importantly, the location. This prayer took place at the temple, the very place where Solomon had said (1 Kgs 8) that Israel should come if they ever faced trouble.

A Levitical temple singer then arose to prophesy:

This battle is not for you to fight; take your positions, stand still, and see the victory of the LORD on your behalf, O Judah and Jerusalem (2 Chr 20:17).

The ensuing scene is almost comical. The army still goes out … but only to watch. They proceed as if going to battle, when in reality, they were play-acting. By the time they reached them, their enemies had already turned on and killed each other.

But though the army had no role, the Levitical Priests took center stage. Their special duty was to accompany Yahweh into battle and announce his arrival. In the past, the Levites would have carried Yahweh’s ark, or throne. Throne or standard-bearing was a common motif in ancient Near Eastern warfare.

Since the ark had already ‘come to rest’ in the Temple (a major theme in Chronicles),[1] the Levites went forth instead as singers. Their praises formed a veritable throne for Yahweh as he went forth to fight for his people.[2] This concept is likely behind the psalmist’s claim that Yahweh is ‘enthroned on the praises of Israel’ (Ps 22:3). Rather than the ark, the priests bore Yahweh into battle on the praises of Israel.

At the beginning of this battle against the 2 million, the singers were silent … until that crucial moment, when with the army in position, the Levites lifted their song. Chronicles’ account is stunning:

At the moment they began to sing and praise, the LORD set an ambush against the Ammonites, Moab, and Mount Seir, who had come against Judah, so that they were routed (2 Chr 20:22).

Praise seems to effect something powerful here. It’s as if praise is the storm-cloud in which Yahweh comes against the enemy. Chronicles emphasizes the co-ordination between singing and Yahweh’s visitation. In the previous verse, Jehoshaphat appointed the Levites to literally ‘praise (his) holy theophany,’ or dramatic visitation. As they sang, Yahweh came in power (cf. 2 Chr 5:13). In sum, this post-exilic story paints the image of a God who achieves victory over the enemy, accompanied by the praise of the powerless.

Joshua and the Liturgy of Jericho

We have strong indications that parts of Joshua were edited during the post-exilic period, during the same time that the Chronicler was writing. Though they probably weren’t study buddies, the Chronicler and the post-exilic editor of Joshua share a concern for highlighting the priestly dimensions of warfare.  Priests probably highlighted and clarified an earlier edition of Joshua (a ‘Deuteronomistic’ edition, in scholarly parlance) that already put a strong emphasis on the Levites.

It’s not surprising, then, that the story of Jericho lands smack dab in the middle of the book’s account of entering the land. Elsewhere, the book flies through the battle accounts in chs. 10-12 without much specificity. But for Jericho (and Ai), the tempo slows … almost to a snail’s pace … or perhaps better, to the metronome of a Levitical procession.

Joshua 3-6 reads like a liturgical procession. It takes two whole chapters for Israel to process across the Jordan, stopping at each significant site to mark it for later re-enactment. If there’s a main character here, it’s the ark. Mentioned some 24x in these chapters, the ark is without doubt the narrator’s preoccupation. There’s a kind of mesmerizing effect as the ark proceeds before the people before they crossed the Jordan. They were forbidden to approach it within 3,000 feet, and they couldn’t move until it moved. The assumption is that Yahweh’s presence was so dangerous and unapproachable that the people needed to stand back, much as they would related to his presence in the Tabernacle itself:

As soon as you see the ark of the covenant of the LORD your God being carried by the Levitical priests, then you shall set out from your place and follow it. Yet there shall be a distance between you and it, about 2,000 cubits in length. Do not come near it, in order that you may know the way you shall go, for you have not passed this way before.” 5 Then Joshua said to the people, “Consecrate yourselves, for tomorrow the LORD will do wonders among you.” (Josh 3:3-5)

The actual battle at Jericho begins and ends at Gilgal, one of Israel’s oldest and most significant places of worship, and all along the way, it marks the priestly procession with stones used for an altar. Leading this 7-day ceremony are the priests, who carry the ark before the people. The 7 day pattern of walking around the city (Josh 6) recalls the 7-day Passover celebration in Joshua 3-4, and the distinctive 6+1 rhythm of the Jericho liturgy recalls the 6+1 story of creation. Not surprisingly, on that 7th holy day, when the city was finally encircled 7 times and destroyed, all of its valuables were given over (as herem, or sacred offering) to the sanctuary, God’s resting place (Josh 6:24).

As in the story from 2 Chronicles 20, the people were accompanying Yahweh into the land, but were in essence standing back in worshipful reverence to watch him win a victory. And like the story in 2 Chronicles 20, the Priests and people remain silent until they unveil—or proclaim—their secret weapon. The people burst forth with shouting and trumpet blasts, but Yahweh is the real actor in the story. Their joyful shout joins the priestly trumpet blast that announces Yahweh’s arrival in the city. In sum, Yahweh achieves his victory amidst the priestly procession and celebration of his people, and culminates in an offering to the sanctuary.

Implications for Considering Violence in Joshua

In the last post I explained how the books of Deuteronomy, Joshua and Kings ‘re-frame’ extermination commands in terms of differentiation. Interpretive shifts were already under way that dislodged the story of conquest from any essential association with genocide. Whether this was for reasons of moral discomfort or what we cannot be sure. But the effect is the same. The story of herem warfare was understood to mean: Don’t cavort with idolatrous nations, and even more importantly, remain true to the Torah.

I want to tentatively propose another similar shift taking place within Joshua. I’m calling it a priestly re-framing, from warfare to liturgy. Joshua is ‘liturgizing’ an earlier story of conquest, with Yahweh’s lone military action in the foreground and Israel’s participation in worship as the accompaniment.

Like Chronicles, Joshua is hyperbolizing (not falsifying! Is Monet falsifying the water lilies?) its historical sources in order to make important theological points. This is a non-controversial claim. Lawson Younger detailed the many ways that Joshua’s conquest rhetoric participates in standard ancient Near Eastern warfare rhetoric, where ‘putting to the sword everything that breathes’ basically meant, ‘winning a victory,’ and everyone knew it. I’m suggesting further that Joshua is also participating in a broader biblical pattern of liturgizing warfare—i.e., (a.) heightening the drama of divine victory, (b.) downplaying or completely eliminating any meaningful human contribution to the victory, and (c.) heightening the significance of the worship system within the battle scene. This sets the stage, I suggest, for the reception of such stories in worship settings for a totally different purpose, namely, to celebrate the power of Yahweh effected in the praise of his people.

The effect of this liturgizing was to render an older story of conquest meaningful for a people whose land had been effectively taken away. The returnees from exile, who most likely put the finishing touches on the book of Joshua, were but a powerless and vulnerable people in the land. They had no standing army, no king, few defenses, and little political clout. But they did have a temple. They did have priests. So when they looked back on their history to ask, where is the powerful God of the past in our day? they answer, He’s present in our worship. Therein lies our strength.

According to Joshua, Israel’s army was never its source of strength. It was ‘not with your sword or with your bow,’ Joshua later reminds the people (Josh 24:12). Rather, it was the God enthroned in the praises of Israel who defeats the enemy. He was the one who ‘ordained praise from the mouths of infants, to silence the foe and the avenger’ (Ps 8:2).

So while Joshua could be read in such a way that warfare is seen as a form of worship, I’m suggesting that the momentum of the book was in the other direction, toward the idea that worship was a form of warfare. The book ‘permits’ both readings, but only one leads toward the one who later took up the name Joshua/Jesus.

[Jesus entered Jerusalem] ‘And the crowds went before him. … But when the chief priests and the scribes saw the amazing things that he did, and heard the children crying out in the temple, “Hosanna to the Son of David,” they became angry. And said to him, “Do you hear what these are saying?” Jesus said to them, “Yes; have you never read, ‘Out of the mouths of infants and nursing babies you have prepared praise for yourself [to silence the foe and the avenger]‘?” (Matt 21:7, 15-16)

Jesus’ march on Jerusalem continues the Joshua story. To the praise of children he achieved his victory.

[2] I detail this in my book Monotheism and Institutions in the Book of Chronicles (Mohr Siebeck, 2014), 165ff.