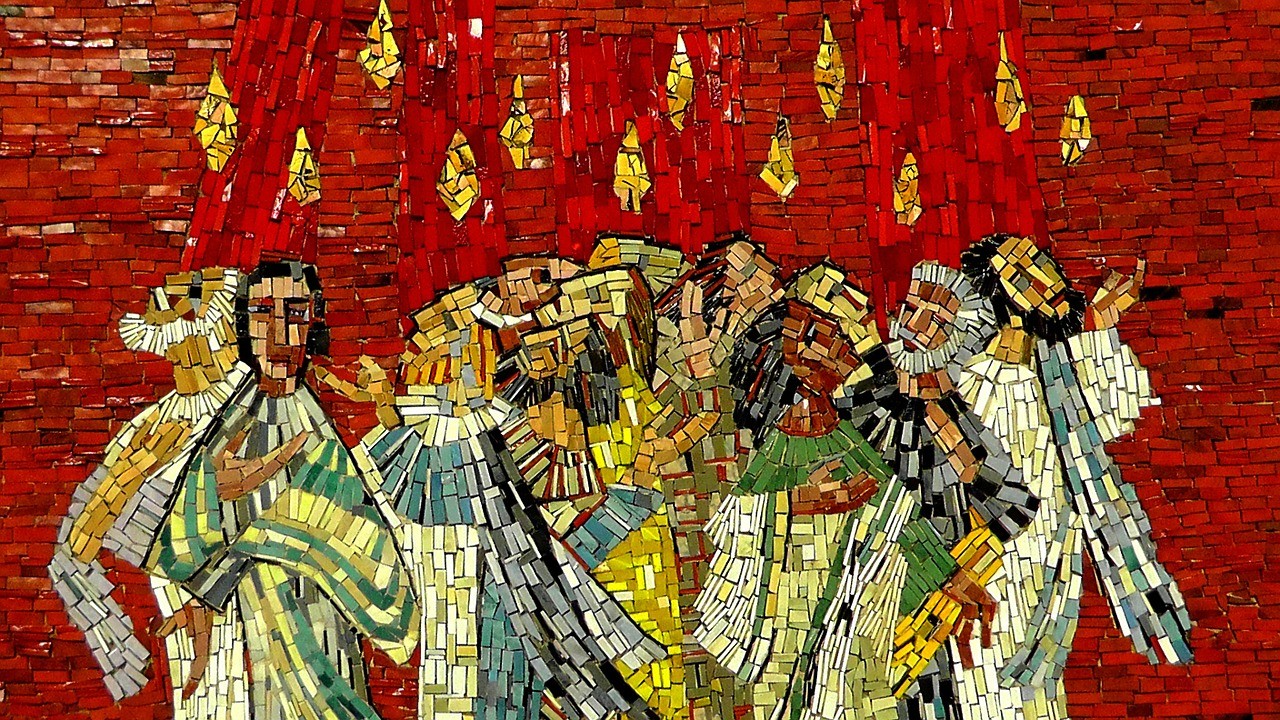 Once, when I was teaching a church class, two people started speaking to each other in German. It made things easier for them because it was their native language. But it didn’t make things easier for Margaret (name changed). With deep frustration she exclaimed, ‘Can we just speak English here!’

The experience of linguistic diversity leads many to wish for unity – or rather, homogeneity. Wouldn’t it be nice if everyone just spoke normal (i.e., English)?  That desire for intelligibility is understandable, but the desire for that language to be English can also betray ethnocentrism. Especially from where I come in the U.S., which has no national language, the fight to retain English can easily slide into a fear-driven attempt to keep ‘our’ culture and ‘our’ language dominant.

Yesterday the church celebrated its founding linguistic event – Pentecost – an event that many hail as the definitive reversal of Babel. Whereas at Babel, God confused languages, at Pentecost, God brought people of all languages together and united them. At Babel tongues were confused. At Pentecost, tongues were understood. You get the idea.

However, Pentecost may not be anti-Babel in the way some suppose. For starters, the reversal idea assumes that a unified language was a good idea gone wrong, and that eschatological unity would somehow involve a return to one language – a Spirit language.

But Genesis never states that the confusion of languages was a bad thing. The only downside was for the Babelites, who couldn’t finish their Manhattan project. On the positive side, language diversification enabled humanity to get on with the task of ‘filling the earth,’ something they were meant to do but didn’t because of their big hero project. Notice the language in Gen 11:4:

Come, let us build ourselves a city, and a tower with its top in the heavens, and let us make a name for ourselves; otherwise we shall be scattered abroad upon the face of the whole earth.

God had wanted humans to ‘fill the earth’ (Gen 1). Babel was in direct contravention of God’s intended vision of teeming diversity.

At Pentecost, God embraces language diversity. He doesn’t destroy it. So yes, the Spirit reverses the imperial unification of Babylon, but not the multiplication of languages.

To see why the preservation of multiplication is important, it’s important to grasp the imperial function of language unification. Joel Green helps us here:

The wickedness of this idolatrous plan [to build Babel] is betrayed in the opening of the Babel story, with its reference to ‘one language’ – a metaphor in the ancient Near East for the subjugation and assimilation of conquered peoples by a dominant nation. Linguistic domination is a potent weapon in the imperial arsenal, as people of Luke’s world themselves would have known, living as they did in the wake of the conquest of ‘the world’ by Alexander the Great and the subsequent creation of a single, Greek-speaking linguistic community.[1]

By confusing languages God was merciful, not punitive. He already recognized that ‘this is only the beginning of what they will do’ (11:6). Who knows what WMDs the Babelites would’ve created? Middleton writes, ‘Babel thus represents a regressive human attempt to guarantee security by settling in one place and constructing a monolithic empire, with a single language, thus resisting God’s original intent for humanity.’[2]

So God gave humanity a push toward its original purpose, to fill the world, cultivate it, build cultures, and grow. Linguistic diversity is a natural outgrowth of this process, and one which the Spirit rubber stamps at Pentecost.

But before we land on Pentecost, it’s important to look at a few snapshots of Israel’s ‘universal’ vision in Isaiah:

In days to come the mountain of the LORD’s house shall be established as the highest of the mountains, and shall be raised above the hills; all the nations shall stream to it. … For out of Zion shall go forth instruction, and the word of the LORD from Jerusalem. (Isa 2:2-3)

I am coming to gather all nations and tongues; and they shall come and shall see my glory… And I will also take some of them as priests and as Levites, says the LORD. … From new moon to new moon, and from Sabbath to Sabbath, all flesh shall come to worship before me, says the LORD. (Isa 66:18, 21, 23)

In the first vision, the nations come to receive instruction from Israel. In the second, they come to worship, and some even becomes priests. They come as nations, with all their diversity of languages (‘nations and tongues’). And, they retain their identity as nations. They neither dissolve into one gigantic Israelite world empire nor isolate themselves completely.

When we turn to Pentecost, we see that the Spirit is similarly uninterested in unifying language: ‘Jews … from every nation under heaven … each one heard them speaking in the native language of each’ (Acts 2:5-6).

Things were getting out of hand, so Peter stood up to interpret the event. He did so by drawing on Joel 2, which anticipated a work of the Spirit that obliterated a different sort of division. Here’s Peter quoting from Joel 2:28-29:

The point couldn’t be clearer—the Spirit gave without regard for status, sex, or nationality. In giving, the Spirit unified the people of God (‘tearing down the dividing wall of hostility’ Eph 2:14), but in a way that preserved their cultural diversity. One Spirit, many gifts. One Spirit, many languages. The Spirit doesn’t negate difference, but cultivates and leverages that difference in service of God’s mission toward all nations.

So yes, Pentecost reverses the homogeneity of Babel. And yes, Pentecost reverses any hostility that may have arisen in the wake of linguistic confusion. Yet, the Spirit puts the diversity of cultures (preserved in their languages) on display and empowers each for the proclamation of a de-centered Good News. This was a profoundly anti-imperial move.  The point isn’t that the Spirit speaks one language. Instead, the Spirit speaks your language—no matter who you are.