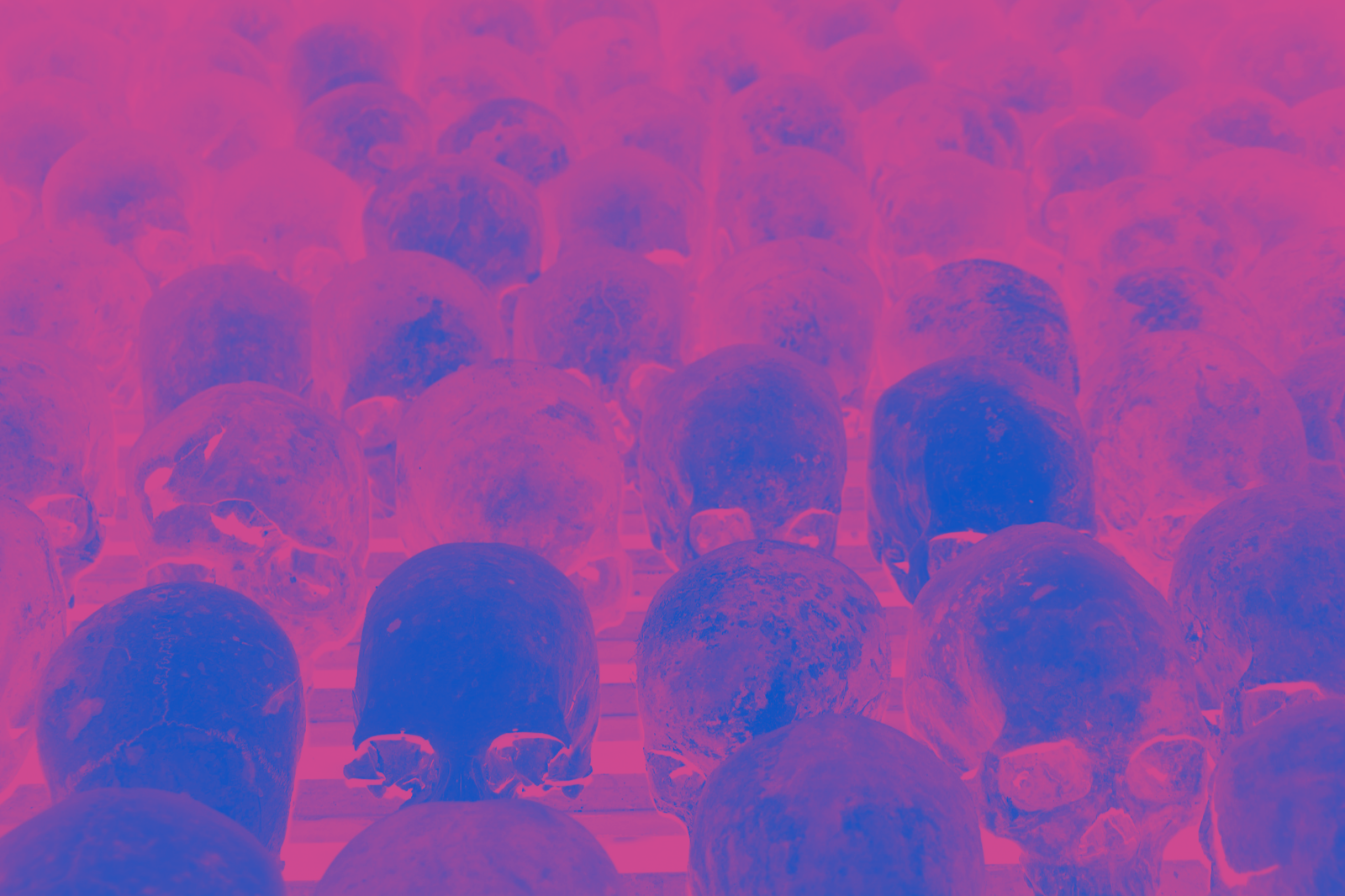 [This is the fifth in a multi-part series on violence in Joshua. Here are parts One, Two, Three, and Four]

Show them no mercy

In his 2003 essay on Joshua in the book Show Them No Mercy, Tremper Longman III draws an enlightening yet disturbing comparison between the extremist ideology of Osama bin Laden and that expressed in the herem (total) texts of Deuteronomy and Joshua:

Yikes! If we were exposed to these parallels outside of Scripture, many of us would want nothing to do with the deity in question. But what do we do when the God of Scripture authorizes indiscriminate killing of all ages and stages, including animals? Moreover, what do we do when he even anticipates the inclination toward mercy, and forbids it?

Some argue that the Canaanites were so evil that they deserved to be entirely wiped off the map. Yet the call to wipe out the Canaanites included children and animals, infants and the disabled. It is impossible—I humbly submit—to maintain any kind of moral argument (based on moral culpability) that includes such groups.

Moreover, the book of Joshua itself does not make a moral case for the conquest. In fact, as Ellen Davis points out, ‘[T]he only recorded sins in the Promised Land are those committed by Israelites.’[2] Instead, within Joshua itself, the rationale for the conquest is religious. Because the Canaanites worship other deities Israel was to wipe them out. Granted, their worship of other deities may have involved immoral practices, but Joshua focuses instead on the disloyalty their worship would entail.[3]

This leads me to a basic, yet under-utilized interpretive principal for reading the herem (total destruction) texts. Drumroll please … try to figure out what the texts are actually doing before trying to reckon with the moral problems they allegedly pose.

So, I’m trying not to begin with the question, ‘How could a good God smite the Canaanites?’ Instead, I’m asking, ‘What might the book of Joshua be doing?’ This is a question of its function, and as my colleague Brad Jersak points out, ‘function, not just content, determines meaning.’

To grasp what the stories of Jericho and Ai—the primary exemplars of herem warfare—are doing, it’s worth going back to the herem command to do so in Deuteronomy 7:

When the LORD your God brings you into the land that you are entering to take possession of it … 2and when the LORD your God gives them [the Canaanites] over to you, and you defeat them, then you must devote them to complete destruction (from Hebrew verb herem). You shall make no covenant with them and show no mercy to them [EXTERMINATION].

3You shall not intermarry with them, giving your daughters to their sons or taking their daughters for your sons, 4 for they would turn away your sons from following me, to serve other gods. Then the anger of the LORD would be kindled against you, and he would destroy you quickly. 5 But thus shall you deal with them: you shall break down their altars and dash in pieces their pillars and chop down their Asherim and burn their carved images with fire [DIFFERENTIATION] (Deut 7:1-5).

But even more importantly, v. 5 draws our attention toward the Canaanites’ worship sites: ‘But thus you shall deal with them … break down …’ The word ‘them’ refers back to the Canaanites, not the idols. It links grammatically to the phrase ‘with them’ in v. 3, and to ‘their altars,’ ‘their Asherim,’ and ‘their carved images’ in v. 5. In other words, vv. 3-5 suggest that the way to rid themselves of Canaanites is to tear down their places of worship. This is vandalism not extermination! Or, if you prefer more pious language, this is a ‘reform movement,’ not a genocidal campaign.

For those steeped in biblical studies, it should come as no surprise that later editors might take up older traditions (Traditionsgeschichte in German), not simply to repeat them, but instead to reframe them for new contexts. Reframing texts meant taking them in new directions. So in this vein of ‘critical traditioning,’ herem warfare became a metaphor for total and radical differentiation from Canaanite worship. Put differently, the call to herem functioned as a call to eliminate illicit forms of worship.

But do we have any evidence that people actually appropriated Deuteronomy or Joshua in those terms? I’m glad you asked. Yes, yes we do. I’ll provide one example. In the book of Kings, we read how the High Priest Hilkiah found the long lost ‘Book of the Law’ in the Temple, which most think is the book of Deuteronomy. When Josiah heard the book read, he was horrified that he and the people were not in compliance.

So, Josiah went on a rampage, tearing down every known place of illicit worship. The narrator of Kings makes a point of the fact that Josiah carried out all the commands of Deuteronomy 7:5 (the herem text), but not against Canaanite peoples. Instead, he carried out herem against (Israelite!) places of worship:

In other words, Josiah carried out the herem command of Deuteronomy 7:5, yet without exterminating entire people groups. He didn’t go hunt for Hivites and Girgashites, but instead, understood true sense of the law by seeking radical differentiation from all forms of ‘Canaanite’ religion.

Could it be that this is how the herem texts in Joshua are meant to be understood? Some texts in Joshua suggest a similar shift from extermination of Canaanites toward differentiation from Canaanite religion:

6 Therefore, be very strong to keep and to do all that is written in the Book of the Law of Moses, turning aside neither to the right nor the left, 7 so that you may not mix with these nations remaining among you or make mention of the names of their gods or swear by them or serve them or bow down to them, 8 but you shall cling to the LORD your God just as you have done to this day. (Josh 23:6-8)

Joshua envisions the people keeping true to the ‘Book of the Law of Moses’ by ‘not mixing’ and ‘not serving’ their gods. Here’s what Deuteronomy and Joshua suggest: Whatever earlier practices of extermination through warfare these texts transmit have been reframed in terms of differentiation in worship. Moberly suggests why this might be:

Although it appears that there was once an actual practice of herem on the battlefield, both in ancient Israel and among its near neighbors, Deuteronomy uses and indeed privileges the notion of herem only because it was seen to lend itself to a particular metaphorical usage for practices appropriate to enabling Israel’s everyday allegiance to YHWH within a world of conflicting allegiances.[4]

Moberly’s point here is that during the time when most scholars think Deuteronomy was written (during the reign of Hezekiah or Josiah), herem as extermination was not even feasible. Yet, the writer(s) of Deuteronomy used an old, shocking, practice to display unrelenting and totalizing separation and allegiance.

At the risk of stopping before I get to add a few caveats, here are a few take-aways from our brief look at the ‘show them no mercy’ herem texts.

First, in the edited form of Deuteronomy, as well as in the final form of Kings, the herem texts were read not as a call for genocide, but instead as a summons to remain loyal to Yahweh and get rid of all ‘Canaanite’ religious influences. Joshua itself includes this summons as its rallying cry in chs. 23-24, where Joshua twice asks the people of Israel (!) to rid themselves of idols (23:14, 23). In other words, Deuteronomy, Joshua, and Kings read the call to genocidal war as a metaphor for separation from idols. While that intolerance might be unpalatable, it is of a different order than genocide.

Second, I suggest then that the stories of Jericho and Ai, and the herem texts in Joshua 10-11 are meant to be read metaphorically as calls for radical loyalty. This is, in fact, the line of interpretation taken up by early Christian interpreters like Origen. The reasons Joshua took up this radically hyperbolic language of herem and total destruction[5] might’ve been similar to the reasons Jesus used radically violent language: ‘If your right eye … [or] right hand causes you to sin, cut it off and throw it away’ (5:29-30).[6] Jesus didn’t stop to say, ‘Now I’m speaking metaphorically here, FYI.’ His audience knew it, and so do we (I hope! unless we’re like Origin, who castrated himself … but that’s another matter). And the force of Jesus’ summons depended on him not stopping to qualify it. In a similar way, Jesus told his followers that they couldn’t follow him unless they ‘hate .. father and mother, wife and children, brother and sisters—yes, even his own life’ (Luke 14:26)! Following Jesus meant forsaking all and taking up the cross.

In sum, like the radical and shocking call of Jesus upon his followers, the enduring challenge of Joshua is to forsake all competing loyalties, in fact, to destroy idols and altars, to show them no mercy!

[3] In my experience, apologists usually assume that the Canaanites were sacrificing their children on a regular basis. Yet, only one text associates child sacrifice with all the Canaanites (Deut 12:31). Every other text associates child sacrifice with the Moabites (to Molech). Yet the Moabites were not one of the 7 nations that Israel was to destroy (Deut 2:9). This leaves the question: Why would Deut 12:31 lump all the Canaanites together in this way? One possibility is that Deut 12:31 is written with a view to the potential behaviour of Canaanites, if left alive, and then influenced by neighbouring peoples like the Moabites. The NRSV captures this potential reading: ‘They would even burn their sons and their daughters in the fire to their gods’ (Deut 12:31).

[5] For a thorough study on the way that Joshua employs standard ancient Near Eastern rhetorical hyperbole in its conquest accounts, see K. Lawson Younger Jr.’s Ancient Conquest Accounts: A Study in Ancient Near Eastern and Biblical History Writing (Sheffield: JSOT, 1990).