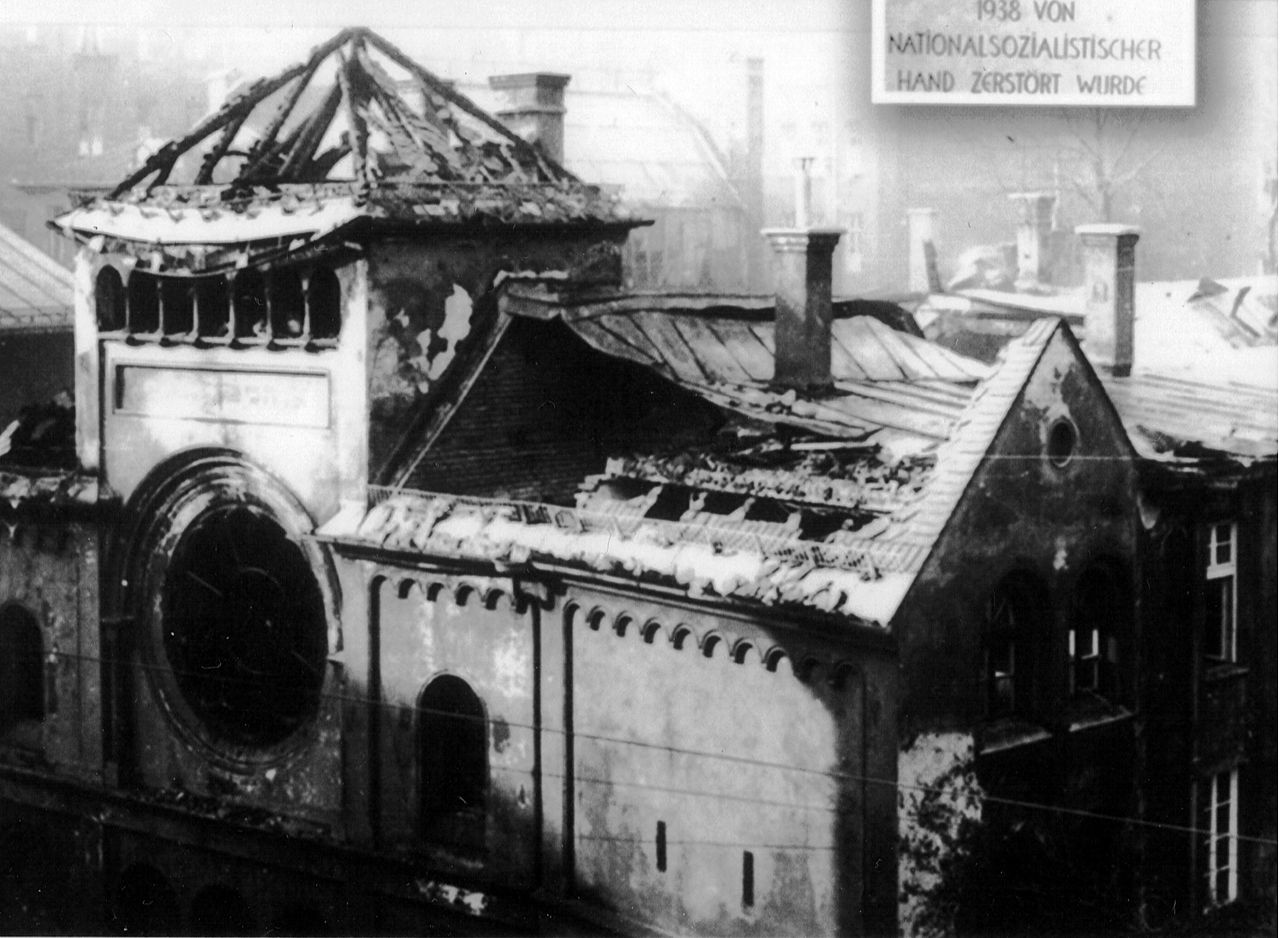 Amidst the total distraction that is the U.S. election, it’s important to remember that November 9-10 marks the 78th year since Kristallnacht (‘crystal night’), or the ‘night of the broken glass.’

On that night, and in the few days thereafter, countless Jewish businesses and synagogues were vandalised and destroyed, approximately 90 Jews were murdered, and over 25,000 Jews taken to concentration camps. The efficient cause of this outburst was the murder of Ernst von Rath by the Jewish Herschel Grynzpan, though he was likely egged on. This murder set ablaze the dry tinder of anti-Semitism in Germany, and then all of Europe. This was a watershed moment for the Jews in Europe. Hitler had long been testing public opinion and receptivity to his increasingly barbaric measures against Jews. Now there could be no doubt. Public opinion—at least in Germany—was behind him. The Nazis ‘now understood that they could murder the Jews with impunity.’[1]

One year later, the University of Jena became the first theology faculty in Germany to remove the requirement of Hebrew from its curriculum. Jena had become a hotbed of for Nazification—and largely due to student activism.[2] To justify the decision to eliminate Hebrew, one professor at Jena named Walter Grundmann made the bizarre claim that the Greek manuscripts of the Old Testament were older than the Hebrew Texts (they’re not, by the way). Meanwhile, the theology students at Jena passed a resolution demanding ‘freedom from so unholy a language.’[3]

The elimination of Hebrew requirements seems wildly insignificant compared to the atrocities carried out by the National Socialists. And on its own, it is. But the readiness to eliminate Hebrew didn’t stand on its own. The reasons why deserve reflection, especially in light of all the xeno-phobia and nationalism that that Brexit and the U.S. election season unveiled.[4]

The loss of Hebrew at Jena is part of a larger more complex set of anti-semitic forces at work in early 20th century Germany and well beyond. From the perspective of German higher education, anti-Semitism was something that could be taken for granted. One might expect things to be different in theology departments, since Christianity was, after all, a Jewish movement that worshipped a Jewish Rabbi who taught from the Hebrew Scriptures. In some ways, anti-Semitic biblical scholarship is hard to even imagine from where we now sit, less than 80 years on.

Yet, for a long time, Old Testament scholars from Julius Wellhausen to Friedrich Delitzsch inhaled the air of anti-Semitism and exhaled high-grade academic work. Enough piled up to the degree that anti-Semitism and Old Testament study actually seemed compatible. Moreover, theological faculties across the nation were controlled by the Nazi-sympathising German Christian movement,

So at Jena, the idea that studying Hebrew was too ‘Jewish’ made sense to the faculty.  Jesus could and should be known apart from the Old Testament, so the logic went. This provided space to set Jesus against his Jewish contemporaries. By convincing Christians that the Hebrew Bible was unnecessary, it was far easier to convince them that their Jewish spiritual ancestry was meaningless, and potentially worth dispensing with, just like the Jews.

Already in 1933, the toxic mixture of anti-Semitism and the Bible spilled over into overt neo-Marcionism (Marcion was an early Church heretic who wanted to get rid of the Old Testament). At a November German Church rally in Berlin, Dr Reinhardt Krauss delivered a speech calling for the removal of the Old Testament from the Bible. It was too Jewish.[5] What Germany needed, he suggested, was a more ‘uplifting’ vision of God and obedience to the government he had placed over them. Insofar as Christianity was connected to Judaism, it was an embarrassment. Hitler believed that theologians could help reshape Christianity and with it find a more Aryan Jesus,[6] and Christian theologians were only too ready to oblige.

Gerhard von Rad at the University of Jena

Gerhard von Rad, one of the century’s greatest Old Testament scholars, worked at the University of Jena during that time (1934-43). He was a strong defender of the belief that Christians could not know Jesus apart from the Old Testament. But his environment was too engulfed in the National Socialist project to pay attention. During the time von Rad taught at Jena, the university taught courses in Eugenics and other dimensions of Nazi propaganda. Some of these classes included ‘Jesus and the Jews,’ ‘Luther and the Jews,’ ‘Fundamentals of Aryan Anthropology and Religion,’ and ‘The Concept of the Reich as the Fundamental Question for German Theology.’[7] Medical students at the university forcibly sterilized 14,000 people between 1933-45.[8]

Von Rad’s appointment at the university was probably due to a mistaken impression that he supported the de-Judaization of theology. He’d been an early member of the SA, after all.[9] He’d also worked with Gerhard Kittel, outspoken anti-Semite and Nazi supporter, and editor of what is still (!) the ‘pre-eminent’ New Testament Greek dictionary (Theologisches  Wörterbuch zum Neuen Testament). Kittel was also the leading contributor to the 8 volume Forschungen zur Judenfrage (Research on the Jewish Question), a series of scholarly works allegedly commissioned by Goebbels for propagandandistic purposes.

Von Rad foresaw the dangerous consequences of the Church cutting itself off from deep engagement with the Old Testament. Already in 1935 he remarked that ‘the links of the churches with Old Testament scholarship have been almost completely broken for more than one generation,’ and they were unwilling to listen to what Old Testament scholars had to say.[10] But at Jena, he and his subject were largely side-lined, especially after he opposed the elimination of Hebrew from the curriculum. The Old Testament was considered ‘Jewish,’ and therefore of little value for those interested in Christian theology. Von Rad didn’t supervise a single dissertation between 1934-1944. Despite his brilliance as a scholar and lecturer, his classes were almost empty.[11] He only re-discovered an academic audience as a military POW at Bad Kreusnach, where he first taught his fellow prisoners the material that later became his massively influential Genesis commentary.

Yet largely on his own, von Rad and a few others within the academy were unable to shore up the Church intellectually against the powerful Nazi ideology that captivated German higher education at that time. Theologians were willing to play their part in providing ‘scholarship’ to support the regime or spirit of the day, in part, because the road was already paved.

Just days after Kristallnacht, the German Christian leader Bishop Martin Sasse distributed a leaflet entitled ‘Jews: Away With Them!’ The leaflet included bits from Luther’s wildly anti-Semitic ‘Against the Jews and their Lies.’ The Bishop recognised the Church’s readiness to establish a more formal relationship with the Nazi regime, and to engage in an official de-Judaizing program. Just one year later, the ‘Institute for the Study and Eradication of Jewish Influence on German Church Life’ was founded, and a de-Judaized New Testament and hymnal produced. Not surprisingly, Walter Grundmann of Jena used the institute to publish his students’ dissertations.

The Church and the Old Testament

The intellectual marginalisation of the Old Testament at Jena was extreme, to be sure. Von Rad worked in a theological faculty (department) that claimed it could know Jesus apart from the Old Testament. Moreover, the kind of overt anti-Semitic propaganda produced by theological faculties is largely unmatched today. We may not live to see the systematic burning of Mosques or Synagogues in our nations.

Yet, this is also a season where a political candidate in the US nods and winks at hate groups (and then washes his hands in protest); it’s a time of rising anti-Semitism in Europe, and rising Islamophobia in the UK (and US). In this environment, and for those of us studying theology, it’s worth considering the potentially unintended consequences of how we do or don’t ‘wield’ the Bible, and the degree to which ignorance of the Old Testament/Hebrew Bible can and will prove costly in the long run.

Von Rad couldn’t stand on his own against even the most absurd Nazi scholarly propaganda without the broader institutional backing of the church. As Brent Strawn observes in his forthcoming book The Old Testament is Dying,[14] the Old Testament is in ‘critical condition’ within the Church, a nearly lost ‘language’ of which the Church has lost fluency. The Church currently speaks only a pidginized form of the Old Testament. So how prepared biblically would today’s church be to confront an ideology that sought to dispense with (or marginalize) the Hebrew Scriptures? My sense is that many would find that the few ‘life lessons’ they draw from the Old Testament (Jacob as example for dealing with difficult co-workers; David as example for confronting your ‘giants’) easily transfer to other New Testament ‘heroes,’ leaving the Old Testament without much use.

[4] My point here is not to make a direct comparison between Kristallnacht and the current political environment.

[10] Greidanus, Preaching from the Old Testament: A Contemporary Hermeneutical Method, 165.