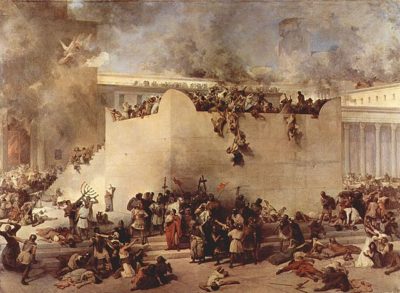 God apparently gave Israel a sacrificial system. He asked for obedience. He asked for victims. And he asked for bloodshed. But in time, and as Israel’s knowledge of God matured, certain groups came to realize that God didn’t actually want this. A religious system that depends on scapegoats, victims, and bloodshed stands in opposition to the divine way of justice and love.

Who made this discovery? It was the radicals … the prophets. It took prophetic insight to imagine a religious world beyond sacrifice. The religious establishment was bent on its own preservation, and lacked the imagination to see otherwise. Here are a few examples of what the prophets came to realise:

For I desire mercy, not sacrifice, and acknowledgement of God rather than burnt offerings (Hos. 6:6).

‘The multitude of your sacrifices—what are they to me?’ says the LORD. ‘I have more than enough of burnt offerings, of rams and the fat of fattened animals; I have no pleasure in the blood of bulls and lambs and goats’ (Isa 1:11).

With what shall I come before the LORD and bow down before the exalted God? Shall I come before him with burnt offerings, with calves a year old? [Implied NO!] He has shown you, O mortal, what is good. And what does the LORD require of you? To act justly and to love mercy and to walk humbly with your God (Mic 6:6, 8).

Even the psalmist piles on:

Sacrifice and offering you did not desire—but my ears you have opened—burnt offerings and sin offerings you did not require (Ps 40:6).

You do not delight in sacrifice, or I would bring it; you do not take pleasure in burnt offerings.  (Ps 51:16)

The prophets and poets make a forceful case. God apparently wanted one thing before, and then later said that he didn’t. To resolve this apparent tension, interpreters propose that their theology matured. It is somewhat akin to a parent helping their kids bzzzzaaaap! the bogeyman under their bed before they sleep. Later, kids realise that all the bzzzzaaaaping wasn’t necessary. It wasn’t doing anything but speaking their language.

Likewise with sacrifice. God spoke the language of the day (ritual sacrifice), and then later led the people to a more mature and even corrected religious practice.

Some also contend that the prophets and poets presaged the abolition of sacrifice in the New Testament. God set his sights on substitutionary sacrifice, or specifically, the scapegoating and violence of victims in the sacrificial system, marking them for elimination. The prophets caught wind of this, and argued that worship would eventually move beyond its primitive state.

Greg Boyd reflects this evolutionary view of Israelite religion and ethics in his recent Crucifixion of the Warrior God, though from a slightly different perspective. He writes:

He states later the ‘canonical authors begin to realize that Yahweh completely disapproves of animal sacrifices.’[2]

In a provocative post on ‘God and Genocide,’ Brian Zahnd writes:

The Old Testament is the inspired telling of the story of Israel coming to know their God. But it’s a process. God doesn’t mutate, but Israel’s revelation and understanding of God obviously does. Along the way assumptions are made. One of these assumptions was that Yahweh shares certain violent attributes with the pagan deities of the ancient Near East. These assumptions were inevitable, but wrong. For example, the Hebrew prophets will eventually begin to question the assumption that Yahweh desires blood sacrifice. Jesus was fond of quoting Hosea’s bold assertion that Yahweh doesn’t want sacrifice, he wants mercy.[3]

I agree with much that Zahnd says here. Israel’s understanding of God certainly mutates and changes. The OT can provide us with countless cases of change and development.

Problems with the Prophetic Critique

There are serious problems with this story of advancing religion beyond sacrifice. Here are a few:

Take away from me the noise of your songs; I will not listen to the melody of your harps. (Amos 5:23).

When you stretch out your hands, I will hide my eyes from you; even though you make many prayers, I will not listen; your hands are full of blood. (Isa. 1:15)

We would also have to eliminate fasting as an effective spiritual practice. Jeremiah pronounces: ‘Although they fast, I will not listen to their cry; though they offer burnt offerings and grain offerings’ (Jer 14:12a; cf. Isa 58:3-6).

To argue that the prophets were urging Israel to move from one (primitive) worship system to another (enlightened) doesn’t work when we consider all the religious practices they attack, unless we also want to displace prayer, music, and fasting as legitimate spiritual practices.

It’s important to remember that the prophets were rhetoricians. They used shocking language to arrest listeners’ attention. When the prophets said that God rejected sacrifice (and music/prayer), they weren’t making timeless assertions. Nor were they making claims about the evolution of religion in Israel! Instead, they wanted people to treat their neighbours with dignity. Isaiah thus urges the people to cleanse themselves for worship by looking after the oppressed:

Wash and make yourselves clean. Take your evil deeds out of my sight; stop doing wrong. Learn to do right; seek justice. Defend the oppressed. Take up the cause of the fatherless; plead the case of the widow. (Isa 1:16-17)

So the LORD will make himself known to the Egyptians, and in that day they will acknowledge the LORD. They will worship with sacrifices and grain offerings; they will make vows to the LORD and keep them. (Isa 19:21)

These [foreigners] I will bring to my holy mountain and give them joy in my house of prayer. Their burnt offerings and sacrifices will be accepted on my altar; for my house will be called a house of prayer for all nations. (Isa 56:7)

These passages show us that the prophets weren’t moving beyond sacrifice. Instead, they were moving toward wholesome sacrifice.

Even one of the most forceful prophetic critiques eventually gives way to restored worship. In Jeremiah 7:22 the prophet exclaims that Yahweh ‘did not speak to your fathers or command them concerning burnt offerings or sacrifices on the day I brought them out of the land of Egypt.’[4] Taken on its own, one could imply that upon further reflection, God decided he didn’t want the whole worship system he set up after all. However, Jeremiah 7 is a textbook case of prophetic provocation, in the context of the most damning denunciation of the temple in the whole prophetic corpus (cf. 7:12). So again, the prophet is not issuing a press release about God’s changed religious expectations. Jeremiah does circle back to say that ‘in that day’ sacrifices would be restored (Jer 33:18, 21-22).

In Mark 12, a young scribe came to Jesus and asked him which was the greatest command. Jesus, unwilling to give one law, says that the first is to love God, and the second to love your neighbour (vv. 29-31). The scribe who asked Jesus likely observed Jesus’ quotation from Deut 6:5 and Lev 19:11. Jesus had woven together the heart of the Torah. The scribe sees that Jesus answered rightly. But notice how the scribe, who was likely pro-temple, continues: ‘And [you answered rightly that] to love your neighbor as yourself is more important than all burnt offerings and sacrifices’ (Mark 12:33).

But Jesus hadn’t said this!

Well, Jesus didn’t directly quote Hosea 6:6 (or 1 Sam 15:22), but the scribe teases out he hermeneutical implications of Jesus’ one-upmanship. He plays along with the hermeneutical game. The scribe asked for one. Jesus gave two. The scribe answered that Jesus was right, and gives three.

But notice the scribe’s answer. He says that loving God and neighbour is more important than burnt offerings or sacrifices. The OT says that God doesn’t delight in or want burnt offerings or sacrifices (1 Sam 15:22; Hos 6:6). The scribe isn’t misquoting; he’s interpreting what the prophets imply. He (and Jesus) recognise the prophets’ rhetorical point.  Love for God and neighbour take priority over the sacrificial system, and where the two clash, sacrifice must give.

Abolishment of Sacrifice & Other Means of Atonement

The early Christians did contend that that the sacrificial system would eventually be abolished. It wasn’t apparent to early followers of Jesus how this was so, and what it would mean. Even after the resurrection Peter and later Paul still worship and even sacrifice at the temple (Acts 3 & 21). Their actions complicate any attempts at an easy Supersessionism, and show the temple’s ongoing value to Jews, at least while the temple still stood.

The destruction of the temple accelerated Jewish and Christian thinking about a world without sacrifice. Note these words from Rabban Yohanan ben Zakkai, who responded to another Rabbi who lamented the loss of the temple and thus atoning sacrifices:

My son, do not be grieved. We have another atonement as effective as this (temple sacrifices). And what is it? Acts of loving-kindness (mercy), as it is said, ‘For I desire mercy and not sacrifice’ (Hos. 6:6) (Avot de Rabbi Nathan, A, 4).[5]

The book of Hebrews argued that Jesus’ death and resurrection brought an end to sacrifices at the temple. Though the temple and its sacrificial system was good, it was also provisional. From a Christian point of view, Jesus ushered in a more complete and permanent atonement.

For if the blood of goats and bulls, … sanctifies those who have been defiled … how much more will the blood of Christ … purify our conscience from dead works to worship the living God! (Heb 9:13-14)

The fact that Jesus brings an end to sacrifice doesn’t negate its value in the story of God and his people, or even for some of Jesus’ early followers.

Perhaps most importantly, we see that Jesus does leave his followers with a sacrifice to ritually perform—the Lord’s Supper. This meal gathers up themes, symbols, and rituals from the atonement sacrifices, grain offerings, libation offerings, and Passover meal.[6] So, ‘Let us celebrate the feast!’ (1 Cor 5:8; Deut 16:3).

[1] Gregory A. Boyd, Crucifixion of the Warrior God: Interpreting the Old Testament’s Violent Portraits of God in Light of the Cross (2 vols.; Minneapolis: Fortress Press, 2017), 11-12.

[4] Thanks to Brad Jersak for this example.

[5] Qtd in Mark Turnage, Windows into the Bible: Cultural and Historical Insights from the Bible for Modern Readers (Springfield: Logion Press, 2016), loc 5548.

[6] Thanks to Dru Johnson for this insight. Cf. Christian A. Eberhart’s What a Difference a Meal Makes: The Last Supper in the Bible and in the Christian Church (tr. Michael Putman; Houston, TX: Lucid Books, 2016).