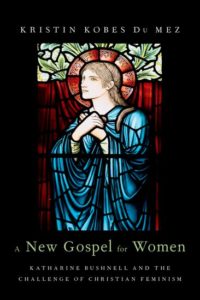 Who was Katharine Bushnell?

I’ve just begun a sabbatical to get some writing done and the main thing I’ll be working on is a book for IVP Academic on what the Bible says about women. On this topic, I’ve wanted to review a book by Kristin Kobes Du Mez for a while now, as she and I share a common heroine in Katharine Bushnell, and Du Mez has written an important book profiling and commenting on her work.

You may not have heard of Katharine or Kate Bushnell or her book, God’s Word to Women described by Du Mez as ‘one of the most innovative and comprehensive feminist theologies ever published.’ (p.2) You might not know that she was an internationally-known social reformer, a women’s rights activist, and that she campaigned against prostitution and the trafficking of women in America, colonial India, and throughout East Asia. She exposed hypocrisy, double-standards, and abuse, and she worked tirelessly to free women—Christian women from oppressive theology in her work on the Bible, and all women from the negative effects of patriarchy in her social activism.

Why then, as Du Mez points out, did she go from being a ‘household word’ to being ‘all but forgotten’? (p.1) ‘In the words of her pastor, her work seemed like “a rock dropped to the bottom of the ocean. Kerplunk, it was gone, the end of it.”’ (p.180)

Not quite though. Thanks to Du Mez, this is not the end of it for Katharine. A New Gospel for Women is not just an acknowledgement of a remarkable woman, it is a sophisticated account of a moment in history and one woman’s contribution, prophetic voice, conflicted reception, rejection, and dogged perseverance to correct what she saw as a distortion of the Christian faith. Du Mez herself moves easily between biography, history, historiography, hermeneutics, and biblical theology, as well as adding her own comment on the possible implications of Bushnell’s voice for women, feminism, Christian feminism, sexuality, and social activism today. It is a fascinating read for a Christian woman, but it should be read much more widely than just among Christian women. Anyone interested in the effects of patriarchy on women world-wide, on what the Bible says about women, on what men and women think the Bible says about women, on the history of feminism in the West, or on the interplay between secular feminism and Christian feminism will find something of interest in this book.

There is much that I could say about Du Mez’s book and why I like it, but I will pick out three things, and then you should read it for yourself.

The first is the honest portrayal of a remarkable Christian woman from a bygone era, who held both some deeply conservative and other startlingly revolutionary ideas, who still speaks today. Bushnell is fascinating because she was highly intelligent, well educated, and extremely competent both as a medical doctor and a biblical scholar. As a social activist, she was fearless and smart, using all her resources to expose injustice and hypocrisy. I have no doubt she was sometimes very difficult, but she was also prayerful, prophetic, and clearly compassionate. Which Christian woman doesn’t find a woman like that fascinating?

On Bible translation, she believed that women should become translators and expositors in their own right because ‘no class nor sex should have an exclusive right to set forth the meaning of the original text.’ Thus far translation and interpretation had been exclusively in the hands of men. (GWTW, 616, 619 cited on p.105). In her view, the lack of women’s voices led to ‘faulty translation and skewed interpretation.’ (p.86) She was convinced that patriarchy was not God’s will for humanity, that we can read the Bible and hear a story of freedom for women, and that there is a direct link between a distorted theology that subordinates women and their abuse.

‘She was confident that the Bible, shorn of its rhetoric of male supremacy and freed from the fallacies of male interpretation, would accomplish immense good for women, and for the Christian church.’ (p.107) This was her grand project on God’s Word to Women. Using her own extensive language and research skills, she conducts over 100 Bible studies on difficult passages reading them in favour of women. It is not perfect. Repetitive and slightly turgid at times, it can become hard work to read, but her readings are scholarly, insightful, and challenging. Significantly, she does this work ‘while upholding the authoritative truth of the Scriptures.’ (p.1)

This undertaking of Bushnell’s is of great interest to me because before I knew of Bushnell or Du Mez, I began a similar task. It’s how we all met. Someone I don’t know read my book on 1 Corinthians 11-14 and sent me God’s Word to Women that he had rescued from a throw out box in South Africa. He thought I’d find it interesting. He was right. I blogged about it and met Kristin on Twitter!

Which brings me to my third point. Du Mez finishes her book by writing this: ‘her legacy might be better compared to ripples radiating across the water’s surface, the influence of her life and work spreading slowly, sometimes almost imperceptibly, across time and space.’ (p.180) Well, that’s my story. And now her work, apparently, is receiving recognition especially in the global South and especially among Pentecostals. She still has a voice.

As a historian, Du Mez is concerned with voices in their own context but voices from a bygone era can sound discordant to our modern ears. She finishes on a point, which should raise questions for all feminists. So far I have made Bushnell sound like a modern-day hero, but Bushnell herself was caught in a social, theological, and ideological conflict on issues such as sexual liberation, birth control, and abortion, all of which she opposed. Even mentioning this can cause outrage among Western secular feminists, and is enough to highlight deep divisions among Christians. In many places this would be enough to shut down the conversation and exclude Bushnell all over again. “Issues” aside for a minute though, to hear Bushnell’s voice it is important to remember first that she was highly attuned to male control and oppression and second that it was ‘not because she feared the emancipatory powers of female sexuality, but because she was convinced that the new sexual ethic would ultimately disempower women and play into the hands of sinful men.’ (pp.185-6) Against what many would imagine of the Christian stereotype, her emphasis was not on female ‘virtue’ and purity, but on male restraint.

The point that Du Mez brings out is that Bushnell’s views do not fit into one package of feminism or another either in the Christian or the secular world, which brings her to her final point. What Bushnell’s mixture of convictions illustrates is the stark conflict of ideas on how empowerment and freedom for women will best be achieved. It leads Du Mez to suggest that feminism from a global perspective will not come in one neat package or worse, one hegemonic form. In short, not everyone will go about the task just as we would want. If the goal is the empowerment of women she claims, rightly in my opinion, that we need a ‘diversity of feminisms suited to the needs of the contemporary world.’ (p.185) What that looks like, I think, is anybody’s guess, but the conversation must go on.

I want to end, however, on Bushnell’s main project in her life, which was to demonstrate that the Bible is not evidence that God endorses the subordination and exclusion of women, but that it is God’s liberating and restorative word to women and thus to men. I hope to be able to demonstrate something of the same when I write my own book, 100 years later.

Follow TheoMisc on WordPress.com
We use cookies to ensure that we give you the best experience on our website. If you continue to use this site we will assume that you are happy with it.Accept