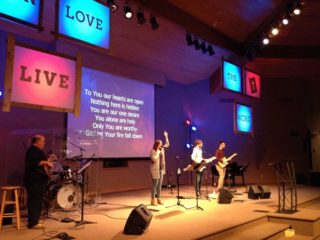 [This is Part III of a series on lament. Part I is HERE, and Part II HERE]

Grieve, mourn and wail. Change your laughter to mourning and your joy to gloom. (Jas 4:9)

Do everything without grumbling or arguing, so that you may become blameless and pure, ‘children of God without fault in a warped and crooked generation.’
Then you will shine among them like stars in the sky (Phil 2:14)

In the popular worship scene, lament songs exist. Sometimes they’re even sung. I appreciate the efforts of those with enough facility in musical style and lyric to lead God’s people in lament, and through lament, to praise.

But attempts to shift contemporary music toward substantial engagement with lament feels like trying to pull a Carnival Cruise off its course with a canoe. Even if it’s headed for rocks. The ship is just too heavy and the music too loud to hear the shouts of those paddling furiously away from the boat—the line taut between them. Those in the canoes might seem like they’re ‘working against’ the boat (big thumbs down!). It might be pointed out—rather obviously—that they’re ‘not on board.’ They’re ‘overly negative’ in all their talk about ‘sharp rocks’ and whatnot. Even more, they’re not grateful for all the benefits offered on the party ship … not to mention Paul’s insistence that we do everything ‘without grumbling or arguing.’

This reaction shouldn’t be surprising, especially since lamenters often describe themselves as isolated and unseemly to others:

Do not ignore me in my time of trouble! Listen to me! When I call out to you, quickly answer me, for my days go up in smoke, and my bones are charred like a fireplace …. I am like an owl in the wilderness, like a screech owl among the ruins (Ps 102:1-6).

The canoe tips over.

Why the resistance to lament?

Some reasons are cultural. Maybe we don’t like public displays of negative emotion. Perhaps we ought to endure our hardships quietly, with a stiff upper lip. It can be hard to hear lament.

But I think other reasons are more idiosyncratic to church cultures that emerge in the wake of the mega-ship Carnival Cruise liners. Despite the lyrical gestures toward vulnerability, brokenness, and desperation in the songs I reviewed (in the first post of this series), we’ve simultaneously exorcised the practices that instantiate those ideals—individual confession and lament.

Let me address just a few common objections to the use of lament in worship services.

It isn’t uncommon to refer to worship services as ‘Celebrations,’ and for churches to seek to create an environment where people—especially visitors—feel warm and welcome. I’m going to sidestep debates about seeker-sensitive church services, but suggest that creating a worship culture that allows people to voice their pain to God is not only welcoming (of all human emotion) but might eventually facilitate a turn toward genuine praise. Maybe worshippers are longing for that kind of environment, where real pain and suffering finds their voice and praise becomes real.

They are, but not exclusively. The psalms are replete with ‘psalms of communal lament,’ set to music. It might be hard for some to imagine … especially if you’re not connected with wider traditions (cf. the African American MAAFA service),[1] and not closely affiliated with an actively practising liturgical tradition,[2] but the biblical evidence tips strongly in favour of laments for communal use. Even individual psalms of lament were often set to music by the choir director (e.g., Ps 5, 88), giving the lonely individual worshipper an opportunity to cry out to God in a corporate environment—or perhaps more to the point, giving the community an opportunity to take up the cry of others.

(I have actually heard this argument) The basic premise here is that lament is an Old Testament activity, and symptomatic of life BC. But this claim is wrong on two accounts. Individuals in the Old Testament did have hope of resurrection, though perhaps not in the same way Christians would express it (‘But God will rescue my life from the power of the grave’ Ps 49:15).[3]

But more to the point, I’d be so bold as to say that Jesus had resurrection hope. Yet, from the cross he cried out (from Ps 22:1), ‘My God, my God, why have you forsaken me?’ And by the way, Ps 22 is ‘for the choir director, according to the tune …’ In other words, it was meant for inclusion in the worship repertoire. In Gethsemane Jesus’ soul was ‘deeply grieved, even unto death’ (Matt 26:38, echoing Ps 42:5-6).  And he cried out to his father to be spared from the cross.

The author of Hebrews writes that ‘Jesus offered up prayers and supplications, with loud cries and tears, to the one who was able to save him from death, and he was heard because of his reverent submission. (Heb 5:7). For many of us, this sounds like an oxymoron. How could ‘loud cries and tears’ count as ‘reverent submission’? To this I suggest reading the book of Job, where the suffering man of God rails against God, takes him to court, accuses God, yet is declared to have ‘spoken rightly about me [God]’ (42:7). Reverent speech sounds irreverent when we lose connection with the biblical lament tradition, and sounds defeatist when disconnected from the hope of the resurrection.

There are. There just aren’t (m)any on the CCLI lists to which many churches subscribe, especially those that use ‘praise bands’ to lead in sung worship. Reclaiming lament requires re-education for all of us, especially those of us who have grown up in worship environments oriented toward the positive and uplifting. We might consider resources like THIS, THIS, or THIS, and songs like Dry Bones,  By the Waters of Babylon (or THIS version), or Leonard Berstein’s Chichester Psalms, or the songs listed HERE or HERE. There are enough to at least get started.

See point #4 … and as an addendum, those going through terrible suffering are not comfortable singing only praise, and perhaps we might heed the words of Ecclesiastes:

Or the words of Jesus,

Blessed are those who mourn, for they will be comforted (Matt 5:4).

[1] The ‘MAAFA Service’ remembers slaves who died in the ‘Middle Passage.’

[3] See Jon D. Levenson, Resurrection and the Restoration of Israel: The Ultimate Victory of the God of Life (Yale: Yale University Press, 2006). I can’t recommend this book enough!