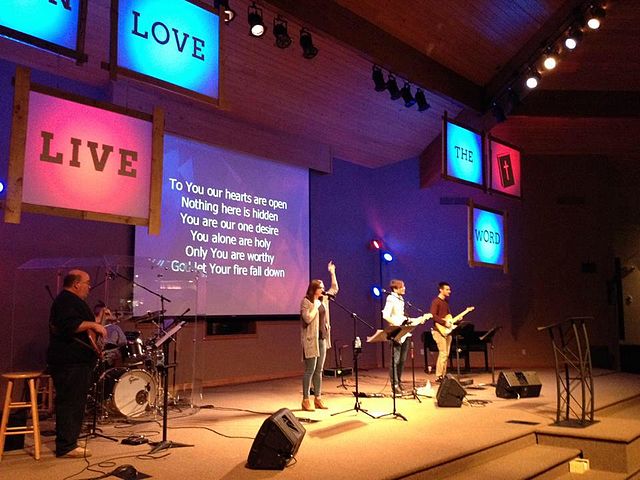 In my previous post I discussed the continued lack of lament in contemporary worship (of the ‘worship band’ variety). My point was that there’s been very little appreciable movement toward lament in the past decades among the major producers of the songs listed on the CCLI lists and the like. Because of that, the average small seeker-type church—which tends to draw heavily from the CCLI top 100—plays 99% praise, with the occasional (awkward) cry for help. I find this astonishing, especially given the tendency for said churches to read books like The Emotionally Healthy Church/Leader/Woman/Etc (http://www.emotionallyhealthy.org/).

I don’t have enough perspective to evaluate the current level of discontent with the persistent optimism and cheerfulness of contemporary worship music. But if I were to sit down with the chief strategists for Contemporary Worship, Inc., I’d suggest that something in the order of Nirvana’s 1990 flannel and grunge revolution needs to take place in worship music, a clearing of air for the raw and abrasive songs of lament (and protest).[1]

I don’t like to idealise lament. Some studies I’ve seen urge lament on the grounds that it’s psychologically and emotionally healthy. This may be true, and it’s probably healthier than repression. But it must be admitted that time also heals wounds, if not all of them. So, not lamenting might leave lamenters and non-lamenters in an emotionally similar place, at least 10-20 years on. I don’t think selling lament (exclusively) on its personal benefits is what the church needs. The point is not self-expression or psychological benefit, as good as those might be.

The greatest benefit to our worshipping communities is a reclaiming of genuine relationship with God. For all our emphasis on ‘relationship’—and perhaps that word is past its sell-by date—worship often reflects a belief that ‘the chief end of man [sic]’ (glorifying God) is the ‘only end of man.’[2] Our worship often portrays a God who only permits praise, and will not allow objections. Brueggemann writes,

A community of faith which negates laments soon concludes that the hard issues of justice are improper questions to pose at the throne, because the throne seems to be only a place of praise.[3]

Treating the throne room as a place for praise alone ignores the fact that the divine palace is also a (supreme) court, a place where citizens of the kingdom press their case with confidence that the divine judge hears, listens, and responds.

A Rich Biblical Tradition of Protest

The biblical tradition is rife with examples of God’s people pressing their case, either against God or against societal injustice. God seems to invite his people into the courtroom for that very reason, from Genesis onward.

After choosing Abraham ‘to accomplish righteousness and justice,’ God unveils his plans to destroy Sodom and Gomorrah. This provokes Abraham’s protest:

This bold approach to the throne seems to be just what God expects—and wants. Through dialogue and debate, Abraham challenges God to ensure justice for the few potential victims of God’s judgement. Put another way, Abraham urges God to limit his severity, and he does so by protesting his actions. Though God does rain down sulphur on Sodom (and some suggest Abraham could have pushed God even further), God rescues Lot and his family and preserves another small town (19:20-21) that was otherwise due for destruction. God is still God, but Abraham’s protest effected some mercy.

Protest within the divine-human relationship is not unusual in the Old Testament. In fact, one of the purposes of prayer and yes, even worship, is to ask God to limit his severity. For reasons unavailable to us, God constructed the divine-human relationship so that our pleadings persuade God to set limits on his justified use of wrath. Put another way, God invites humans into the process of fostering and exercising divine mercy. Covenant partners are not only passive recipients of mercy, but active agents in its implementation.

The next major occasion where God’s servant protests God’s actions takes place right after the golden calf (Ex 33-34), when Israel breaks the first and second commandments and nullifies the covenant that God had just made with them. God was so angered that he proposed wiping out the nation to start anew with Moses.

But Moses intervened by appealing to God’s reputation:

Why should the Egyptians say, ‘It was with evil intent that he brought them out to kill them in the mountains …’ Turn from your fierce wrath; change your mind and do not bring disaster on your people! (Exod 32:12)

God did not reprimand Moses. Instead,

The LORD changed his mind about the disaster he planned to bring on his people (32:14).

In sum, in failing to lament, we fail to exercise our covenant responsibility to bring matters of justice and righteousness before the divine judge. We fail in our civic duty.

Jewish novelist Chaim Potak discusses a tradition of lament during the Shabbat service:

There used to be a tradition, which may still be in existence in some Jewish communities, where if you had a complaint against God you stopped the service on Saturday. You went up to the ark, you opened the [Torah] ark, and you stood there shouting at God until the rabbi finally led you away.

What if we saw our worship music as a means of leading people to the ark? Or the courtroom? There’s something enormously dignifying and freeing in telling people that their disputes and complaints will be heard in this court. They may feel themselves without power in the halls of human political power,[5] but not in the divine court.

Let us find the chords to bring them there, and let us enter His court with protests.

[1] Perhaps this risks an unnecessary pendulum swing, but I’d be thrilled to have the conversation.

[2] Brueggemann, ‘The Costly Loss of Lament,’