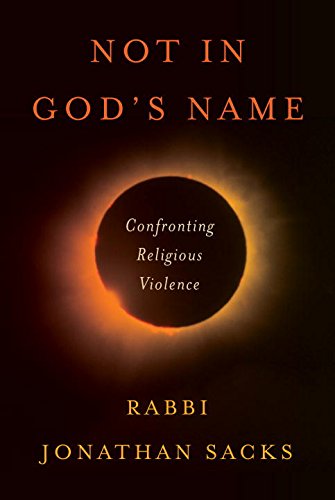 Rabbi Lord Jonathan Sacks has a truly ambitious vision of interfaith respect, peace, and mutual blessing in his recent book Not in God’s Name: Confronting Religious Violence. I don’t wish here to give an overview or critical review of his book, but instead, I want to share an important and tantalizingly provocative theme he explores in Genesis.

Sacks’ book sits within the stream of several recent books that use Genesis as their point of departure for reflection on the major questions of God, ethics, and morality in our time. Alongside Sacks we could also mention Leon Kass’ recent The Beginning of Wisdom and Iain Provan’s Seriously Dangerous Religion, each of which asks the ‘big questions’ using essentially the same guiding questions: What happens when we let the book of Genesis form our moral vision? What kind of people do we become? What sort of values and societies does a book like Genesis engender?

Sacks’ main concern is with religiously motivated violence. Drawing from social anthropology, biology, religious theory and history, Sacks contends that violence basically exists because as social animals, we live and find identity in groups. Group identification brings out the best and worst in us. It can lead to incredible self-sacrifice and generosity, but toward outsiders, it can result in rejection and boundary maintenance. A stronger ‘mutant form’ of group identity can erupt when a group embraces a kind of ‘pathological dualism.’ Pathological dualism is a radical splitting of the world into good and evil, which sanctions and devolves into the most severe forms of hatred and violence. While he’s careful not to state that religion causes violence (thank goodness!), he does recognize that religions can become susceptible to sharply dualistic thinking of the sort that justifies demonization and murder. In this hyper-acute form of dualism, murder can become justified because you aren’t killing human beings; you are killing a virus or cancer that threatens one’s group.

Here is where the story of Genesis becomes especially important, and where Sacks’ thesis re-embraces religion as a challenge to violence. From its fourth chapter, Genesis thematises violence, and it does so by telling an enigmatic story of sibling rivalry. This story includes the very first religious act in the Bible (sacrifice), an act that ends in violence. Rather than side-stepping the issue of religiously motivated (or at least religiously occasioned) violence, Genesis lifts it up for reflection.

Sacks also attends to the sibling stories of Genesis because that is how he sees the three monotheistic faiths. Whether or not that is the most precise way of expressing the relationship between Judaism, Christianity and Islam (and I wish here he’d engaged Jon Levenson’s critique in Inheriting Abraham), there is a kinship between them that works by analogy. They each share a similar religious and Scriptural tradition.

Previously, I’d read Genesis’ sibling stories along the lines of primogeniture subversion. By this, I mean that the Genesis story sees the younger son subverting the inheritance rights and privileges of the older son. Primogeniture subversion is indeed an intriguing thread running through the book that cannot be ignored. The younger brother Isaac was the promised and blessed son of his father Abraham. The younger brother Jacob steals the birthright of the older Esau. The older brothers bow to the younger Joseph. Jacob blessed the younger brother Ephraim rather than Manasseh. If read in isolation, this thread reinforces the value of perpetual struggle and subversion. It’s the sort of story that radicals love. And while I don’t consider myself very radical, I do revel in the upside-down nature of the biblical story. As Sacks points out, God chooses ‘those who cannot do naturally what others take for granted’ (117). Natural strength disqualifies, while God-enabled strength qualifies the weaker disadvantaged brother. To continue this line of thought, God ‘chose the foolish things of the world to shame the wise’ (1 Cor 1:27).

But perpetual subversion leads to tremendous animosity and antagonism. It leads to violence and rejection. Ishmael is cast out. Esau wants to kill his brother. Joseph’s brothers try to kill him and sell him into slavery, and so on. The story of perpetual struggle and subversion is cyclical and doomed to failure. It cannot sustain societies, nor is it a particularly helpful way of thinking through the problems facing ‘sibling’ faiths like Judaism, Christianity and Islam. When the weaker gains the upper hand by deceit and violence, the stage is set for another revolutionary.

So here is where the genius of Genesis’ sibling theme shines brightest and provides an alternative. To begin, Genesis fosters tremendous sympathy for the outsider. The obvious instance is the Patriarchs themselves, who never owned land (except a burial plot), and lived as strangers in a foreign land. This was a crucial part of their identity (e.g., Gen 23:4). But also, Genesis leads its readers to feel for the cast off sibling.  Who cannot weep for the desperate Hagar, parched and helpless as she watches her son Ishmael dying of thirst in the wilderness? And what about Esau’s distress upon realizing his brother’s theft? ‘He cried out with an exceedingly great and bitter cry, and said to his father, “Bless me, me also, father!”’ (Gen 27:34) The Hebrew Bible, Sacks explains, leads us ‘to enter into the humanness of the Other: Ishmael, Hagar, Esau, Joseph and his brothers, Leah and her children’ (180). This is the outsider empathy that Genesis forms in its readers, and the character that finds resonance throughout Scripture:

You shall not wrong or oppress a stranger, for you were strangers in the land of Egypt. (Exod 22:21)

You shall not oppress a stranger; you know the heart of a stranger, for you were strangers in the land of Egypt. (Exo 23:9)

But Genesis goes further than empathy. Genesis moves its readers from empathy toward peace and reconciliation with the estranged sibling. This begins with recognizing one’s basic kinship with the outsider. The Ishmaelites and Edomites are your brother, Genesis says. Then, Sacks directs our attention to the last scene in each of the sibling stories. A beautiful picture begins to emerge from the darkness.

Things are bleak at first.  With Cain and Abel, the older kills the younger. While God pursues Cain, there’s no real restitution. Next, we read that after Sarah died, Isaac went to live near Beer Lahai Roi (25:11; cf. 24:62). Beer Lahai Roi is where Hagar and Ishmael had fled (16:13-14). We don’t know why Isaac was living there, but it is suggestive that when Sarah died Isaac and Abraham went to live near Hagar and Ishmael! The Rabbis even suggest that Keturah, Abraham’s second wife, was Hagar. This might explain a further detail in the story, that at Abraham’s death Isaac and Ishmael came together to bury their father (25:8-9). The point, as Sacks explains, is that ‘neither Abraham nor Isaac made their peace with the banishment of handmaid and child’ (121). Their futures part ways, but they do so with their own blessings.

Next, we discover that the estranged Esau and Jacob reunite for a brief time (Gen 33). The extraordinary feature of this meeting is not simply that the brothers make their peace. It is what happens when they make their peace. To see it, we have to go back 22 years in the story to when Jacob stole Esau’s blessing. Isaac had blessed Jacob with two things:

But then … and here’s the twist … these are the precise things that Jacob bestowed upon his brother. Jacob returned the blessing! He went to Esau and ‘bowed down to the ground seven times’ (33:3) and urged his brother to receive abundant wealth from him, saying ‘accept my blessing’ (33:10-11) (132-33). Having held it for 22 years, Jacob gives back the blessing.

He can do so, as Sacks observes, because he’d already received his own separate blessing from his mother Rebecca (28:3-4). This blessing was more suited to the promised family. It was a blessing of land and progeny, not of wealth and power. In sum, like Isaac and Ishmael, both brothers are blessed and arrive at least at an uneasy peace toward the end of their lives.

Climactically, however, the Joseph stories in Genesis 37-50 tell the story of brothers who reconcile and reunite. Joseph refuses to self-identify as a victim, and brings his brothers to self-identify with the victim, resulting ultimately in their reconciliation and blessing for the whole world.

We thus move from fratricide (Cain and Abel) toward brothers reunited (Isaac and Ishmael), and from brothers re-united into an uneasy peace (Jacob and Esau) toward brothers fully reconciled (Joseph and his brothers). Thus, Genesis leads its reader progressively through stories of sibling hostility and subversion into the realm of reconciliation and mutual blessing. ‘Sibling rivalry may be natural,’ Sacks writes, giving a nod toward cultural anthropology, ‘but it is not inevitable. It can be conquered’ (170). This is indeed an inspiring and challenging message, and well worth reflection in our fraught and highly charged contexts of inter- and intra-religious conflict.